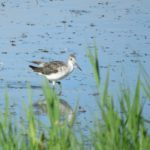 A full mini bus set off from Harrogate on this fine day with great hopes of finding Waders. Our first port of call was North Cave which happened to be en route to the main destination. Not only did we get our first dose of birds – including a nicely challenging cryptic juvenile Ringed Plover – some of us also topped up with bacon sandwiches and coffee (in my case missing a Greenshank and a Snipe!) There was also a lone Common Tern who must surely soon be off soon considering I saw 7,000 pass by Spurn on the previous Friday evening! 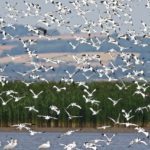 After crossing the Humber we took our chances to cross the busy road and scan back across the water towards the ever-changing shape of Read’s Island. We were rewarded with spectacular displays of hundreds of Avocets who breed there in relative safety from predators ( although Colin informed us that deer are now established there having swum across). There were large numbers too of Shelduck, Lapwing, Redshank, Golden Plover and fewer numbers of Curlew. 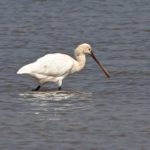 Alkborough Flats is situated at the confluence of the rivers Trent and Ouse which form the Humber. At least half of the vast stretch of low-lying arable land (nearly 990 acres) has been given a new intertidal habitat by the breaching the old flood defences, allowing tidal water to flood the area providing reed beds and lagoons. The hope is that low-lying towns along the Ouse and Trent will now avoid flooding. Here, despite a poor breeding season due to the wet Spring, we saw Amazing Amounts of Avocets! 753 were counted by one member. A very special sight which greeted us on our arrival were 12 Spoonbill with two demonstrating their swishing fishing technique with their remarkable bills. 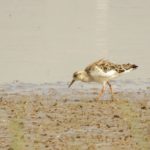 There was altogether a delightful mixture of waders all preening and relaxing: still colourful Black Tailed Godwit, elegantly delineated Ruff, delicate-looking Greenshank and a pair of turbulent Turnstone. The duck were harder work being in eclipse but gave us several different species. Those with enhanced optical equipment ( including very good eyesight) were able to spot Bearded Reedling and Yellow Wagtail in the base of the reeds beyond the water’s edge.

A pleasant walk to the Tower hide provided an excellent site for lunch and an extensive view of the reserve. Unaware of our gaze, a Water Rail confidently worked the area in front of us allowing us to see at least two of its young – one second  brood and one first brood (little and large). They were also watched by a pair  of young Marsh Harrier who were, fortunately, not quite on form yet.

On the way back we had further excitement of two Hobbies that seemed to be the subject of a hidden photographer’s gaze. Then we were encouraged by Brenda to experience a moment’s contemplation at the site of St Julian’s Bower where there is an ancient Labyrinth. Here we also had amazing panoramic views of our last destination – Blacktoft Sands.  A similar collection of birds awaited us here but also we found a Dunlin at last to complete our wader list. By the end of this marathon trip, once more expertly led by Colin, we had 80 species in total which included 14 species of wader.