Arriving at Seahouses just before 10am the visibility was crystal clear, with excellent views of the Farne Islands. We met up with Muff and Jack who were staying in the area, making eight in total. Low tide enabled us to scan the rocks for waders, revealing Purple Sandpipers, Dunlin, Ringed Plovers, Oystercatchers, Redshank, Curlews and Turnstones. Goldeneye and ‘Cuddy’ ducks were on the sea and in the harbour, both looking resplendent in the sunshine. 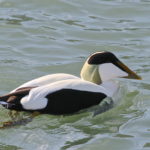 The Eider Ducks are locally named after St Cuthbert who established a chapel on Inner Farne 600 years ago. The weather was perfect for a trip to the Farne Islands, and unable to resist the chance to see them at close range, Colin went to enquire. He came back with the news that the ‘Glad Tidings’ was sailing at noon from Seahouses, passing the aforementioned St Cuthbert’s chapel, the cliff nesting sites, the seal colony as well as the Longstone Lighthouse of Grace Darling fame. The Fulmars, early nesters, had paired up and claimed their breeding sites, and Kittiwakes had also returned for the breeding season. Lesser Black-backed Gulls, Cormorants, Shags, Guillemots and a few Razorbills came close to the boat and we got a very satisfying view of the very first returning Puffins. There is a notable colony of about 6000 grey seals which includes 1000 pups born each autumn, and many were basking in the sunshine.

There were also spectacular views looking back at the coastline and our intended destinations once back on shore. 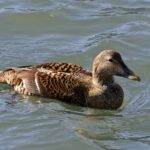 We drove to Budle Bay where the water was still low, but highlights included Red-breasted Mergansers, Wigeon and Little Egret. 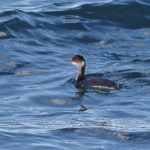 The hide at Fenham-le-Moor gave views over to Lindisfarne and a relatively quiet estuary but a fleeting glimpse of Twite and Linnet made up for that. Stag Rocks, north of Bamburgh was our last stop and proved very rewarding, straightaway there was a pair of Long-tailed Ducks and a Black-necked Grebe was close in too. The light was stunning and a scan further north revealed at least 20 Slavonian Grebes amongst the Common Scoters. There were several Red-throated Divers to add to the list, smaller in size than the Black-throated Diver which had been seen flying earlier on in the day.

We drove home with long shadows enhancing the beautiful Northumberland scenery and Sue Harrison started the bird count, 68 species seen! Many thanks to Peter and Colin for driving and thanks also to Colin for leading what was an absolutely superb day out. This trip was definitely worth the travel time and the chance to see a good selection of grebes, sea ducks, waders, gulls and the Farne Islands at close range was not to be missed.