A cold and slightly overcast day heralded our minibus trip to Fairburn where we hoped to find some wintering birds. At our first port of call we met up with two more members (so twelve in total) and walked to Charlie’s Hide on Village Bay where we heard that Smew had been reported. This diminutive Sawbill which breeds in Fenno Scandinavia and Russia over-winters in North West Europe. The bird was to prove very elusive but we were content with our views of Goosander, Snipe, Pochard and beautifully singing Song Thrush. Moving on to the Centre of the reserve, the Pontoon near the car park offered an opportunity to scrutinise the reeds more closely. There, we were lucky to find a Water Rail (thanks Barry) a bird which usually reveals itself only by its call but we had close views for quite a while. 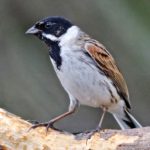 At the Centre Feeder, along with the more common birds, we enjoyed Tree Sparrow, Reed Bunting and a resplendent male Bullfinch. Moving on to the Pickup hide we still had no sign of Smew but, following the line of flight of a Little Egret we found a large communal breeding colony which included Cormorant and Heron. Our final attempt with the Smew was at the Lin Dike Hide where we watched displaying Goldeneye and Great Crested Grebe. However, as one member put it, we remained ‘Smewless’. Leaving the hide we were informed by a local that there were Peregrine on the two towers in the distance. It felt as if the three Peregrines sitting there were returning our gaze as we looked through the scopes. It was just then that persistence was rewarded as Colin announced that a distant, ‘Teal-sized’, red headed, white cheeked bird was indeed a female Smew. It revealed itself for at least ten seconds before disappearing behind the reeds. I subsequently learnt that they favour flooded landscapes (and Fairburn certainly qualified on this count). 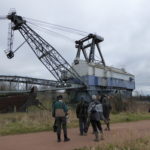 We also added Pintail to our list here and then set off to St Aidan’s – another reclaimed landscape but with more obvious signs of its industrial heritage. Here, we had been informed, we might find a Greenland White-fronted Goose if we were lucky. Looking at the vast expanse before us, the term ‘needle in a haystack’ came to mind. However, the weather brightened, Skylarks sang, myriads of Gulls screeched and we enjoyed a long walk through the wetlands adding Stock Dove, Wigeon, Gadwall and Lapwing to our growing list. After scanning the large number of Canada and Greylag Geese and almost losing the will to look at another goose, Colin found our quarry. It was on the brow of the hill with its back towards us, making identification as difficult as possible but, once seen, never forgotten! 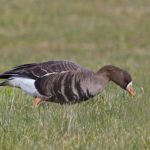 The Greenland White-fronted Goose with its beautifully deeply scored underbelly and prettily white-edged bill, together with a slighter and darker appearance, enthralled us all. By the time we had left, we had 67 species for the day (which seems to be the magic number for recent trips) and Colin had certainly earned his stripes!