I wondered how Colin was going to cope with us all (16 in total) as we gathered eagerly at Brimham Rocks, energized with the promise of a fine day and clear skies.  But, obviously used to instilling a sense of order and purpose, Colin established ground rules and commenced by outlining our target species for the morning (Stonechat) and even remembered to add some health and safety advice.

Our morning stroll over the moorland was, for me, uncharted territory and quite a contrast to the area of Brimham Rocks where I normally walk.  We were soon treated to fine views of deer:  four Reds, two Roe and a Sika buck with a magnificent pair of antlers.  It was whilst we were examining these creatures that we became aware of at least two Stonechats in the foreground.  Their colours stood out beautifully against the surrounding pale ochre of the dead grasses and echoed the russets of the distant deer. 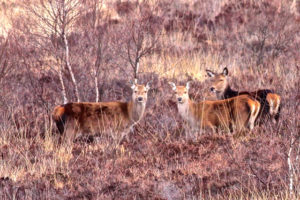 There was a distinct lack of other passerines but we were accompanied at several points by the clear, loud and melodious trills of various Wrens.  And we enjoyed the unexpected zigzag flypast of a Snipe which had obviously decided that an approaching army of 16 was rather too many to risk.  Not so a Red Kite which drifted directly overhead, giving excellent views.  Further along, from an elevated position, we had a panoramic view of seven Buzzards soaring and occasionally clashing with each other.

After returning to Brimham car park, we relocated to Sawley High Moor for lunch.  Following a short game of musical cars, half of which were positioned at one entrance point and half at another, we were privileged to explore yet another area new to me.  The land, being part of a shooting estate, had vast tracts which were promising heathland habitat  and Colin expressed the conviction that in future  some interesting species might take advantage of the area.

Our target species (Crossbill and Redpoll) were sadly lacking.  Sounds of Coal Tit and Goldcrest were all that we could hear, though Colin discerned a distant Kestrel.  As we stood straining eyes and ears, a Sparrowhawk swept over the trees.  Indeed it seemed that raptors were the order of the day as we were able to count another six Buzzards in the eastern sky with a view that encompassed the A1 in the distance.

It was a great day out, despite the small number of birds, and we were very grateful to Colin for giving his time when he should have been packing for his holidays.