Another successful day under the leadership of Colin Slator (The Mountie – always gets his target species). 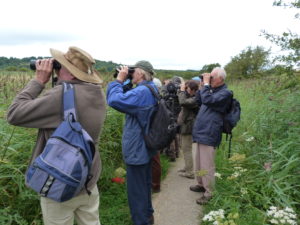 Eighty different bird species were seen, including Great White Egret (GWE), and at least ten types of butterfly, including Grayling and, well, read on to find out.

The day dawned cloudy and cool with light drizzle, which was disappointing considering the mini heat wave we experienced in the days before.  However, the 15 of us travelled hopefully, even though we were heading west, where the weather is usually worse.

Our first port of call was Hellifield Flash, which curiously was almost empty of water though this did not deter several species associated with mud and water, including Little Ringed Plover (LRP), Snipe, and Teal from using it. 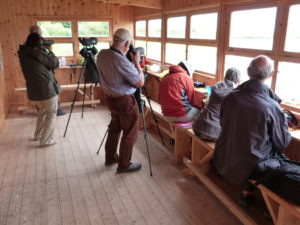 Colin decided that, given the cool conditions, which were unsuitable for butterflies, it was best to visit Leighton Moss first before pursuing our main quarry, the High Brown Fritillary (HBF).  A couple of hours were pleasantly spent in the various hides which were accessible from the visitor centre, the highlights being distant views of the aforementioned GWE, several Cream-Crown Marsh Harriers and young Water Rails, which seemed quite happy in their naivety to feed in the open.

Parking the minibus in a rough field (Sorry, Budget!) because it would not fit under the low bridge, we next took lunch in the Morecambe and adjacent hide, where we saw a flock of 14 Little Egrets, some Greenshank and yet more LRP as well as many more common waders.  Leaving the hides we were then able to add to our list several passerine species which were showing well in the nearby bushes.

The sun was beginning to come out now so, extracting the minibus with difficulty from the field, we headed for Gait Barrows National Nature Reserve to search for the elusive HBF. Taking the so-called Limestone Trail through the trees we came upon some extensive stands of Hemp Agrimony which held disappointingly few butterflies but we were able to find Meadow Brown, Gatekeeper, Peacock, Small Tortoiseshell and Small Skipper, as well as Emperor Dragonfly.

The trail led us to an unimproved meadow where Dan spotted and photographed a fritillary, which had disappeared by the time the rest of us caught up with him.  We all went searching and were able to flush several other fritillaries, at which point shouts of “High Brown” went up.  This was when Colin was thought to have scored yet another success with his target species and was christened The Mountie by Sue.

However, disappointment was soon to follow, for on netting one of the fritillaries and examining it closely, it was found to have green underwings and was clearly a much more widespread species, though no less beautiful for that, the Dark Green Fritillary.  Disappointment was followed by elation shortly after when, scouring the limestone pavements further along the trail we were able to find and photograph several Graylings – a first for some of us.  ( See Photo Gallery for another photo of this butterfly. ) 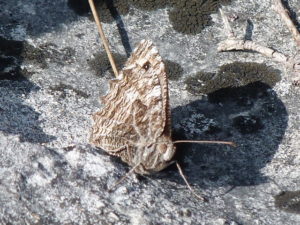 Returning to the minibus we headed for home, calling at Milnthorpe to try and find the Glossy Ibis which is seen regularly on the River Bela there.  We were unlucky on this occasion but superb views of a herd of Fallow Deer more than compensated.  Our next stop was for fish and chips at Kirkby Lonsdale whence, replete, tired but happy we returned to Harrogate.