We set off from Harrogate in glorious sunshine, knowing that if the met. office had got it right, we had until lunch time before we hit the deluge coming in from the west. We stopped off at Hellifield Flash where there were Common Sandpiper, Ringed Plover, Lesser Black-backed Gulls, Common Gulls, Black Headed Gulls and Shelduck with two well grown ducklings. 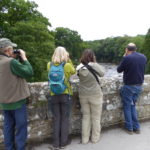 Looking over Devil’s Bridge Will Rich

Our next stop was near Kirkby Lonsdale at Devil’s Bridge spanning a beautiful stretch of the River Lune. We saw Goosander, Grey Wagtail, Common Sandpiper, Grey Heron and brief views of Spotted Flycatcher here.

Onwards and westwards to Foulshaw Moss, a raised peat bog run by Cumbrian Wildlife Trust. This is a huge area created by felling trees and made accessible by a board walk. Improvements also include a small warden’s hut which has a screen running a video of the reserve’s most famous summer visitors………a pair of breeding Osprey. Cameras had recorded the story of the three eggs and the two remaining chicks. From the viewing platform we saw one adult bird fly from the nest and perch near its partner some distance from the nest, through our scopes. As we walked along the board walk we also got great views of Tree Pipit, singing from its perch at the top of a birch tree. 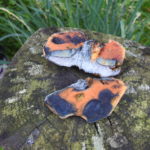 This is the point where naturalists and rain collided. A smattering at first, causing a retreat back to the bus and an early lunch. Later at Warton Crags we took shelter under trees to view two of three juvenile Peregrine Falcons, both sitting it out hoping for better weather.

RSPB Leighton Moss with good hides seemed the obvious place to carry on the expedition. The rain eased from time to time allowing us a chance to race between hides. Timing is everything and our bedraggled arrival in Grisedale hide witnessed the fact that our timing was a little out of sync! The pair of Spotted Redshank, so recently seen from there, were obviously not impressed either and had disappeared, leaving only a very smart Black – tailed Godwit for us to enjoy.

Coffee and cake and a rummage through the second hand books in the cafe rounded the trip off nicely and a surprising 66 birds were seen. Sadly no dragonflies or butterflies due to the rain, but a good trip nevertheless, what else would you do on a wet afternoon?

Many thanks to Colin for getting the best out of the day and driving us home in trying conditions.