It was fine but very cold, with a poor forecast, when the 12 naturalists foregathered at the Gouthwaite viewing point. With plenty of expert eyes trained on the mud at the top end of the reservoir we soon found Dunlin, Ringed Plover, Redshank, a Common Sandpiper and the usual quantity of black headed gulls – and then June spotted a Knot which was very much the colour of the mud. A few duck and grebes were swimming on the wave-tossed water, but the clouds were gathering and June decided to move us quickly up to Scar House before the predicted precipitation arrived! 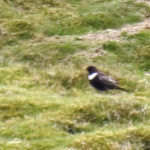 As soon as we got into the car park at the top of the valley, we noticed a raptor flying overhead, which treated us to a great display of diving steeply then swooping up again. After much discussion of male goshawk versus female sparrowhawk, the experts confirmed that it was a Goshawk! Most of us were thrilled but June pointed out that it had probably terrified all our target species into hiding. However, only a few minutes later, the first Wheatears appeared, the male in fine breeding plumage, then Ken spotted the first Ring Ouzel, a male with its dazzling white bib, which stayed in view for some time, posing for photos and occasionally joined by a female. A really excellent display, despite the strong northerly wind which was now bearing snow.

This was a hard act to follow but we walked across the dam, spotting Siskins and Mistle Thrush and another Common Sandpiper; too early and/or too cold probably for housemartins. We ventured up the west shore of the reservoir, noting a small copse which might shelter redstarts, but noticing mainly that we were all in danger of hypothermia. A strategic retreat to the cars for lunch!

The afternoon was spent working our way down the valley stopping at various sites well known to June – our main target was pied flycatchers but the weather was not cooperative; June eventually spotted a bird going into one of the nesting boxes and we waited and watched hopefully for it to emerge. She explained that male birds arrive before females and prepare the nest, presumably this one was still waiting for no further sightings were seen. There were several other interesting sights in the valley, including a pair of song thrush feeding fledged young, some bivalve fossils found for us by David, a mallard duck with 8 newly hatched ducklings and a brief sighting of a redstart by June. The rest of us were insufficiently attentive to catch it (allegedly we were chatting!) We finally visited a beautiful little waterfall overlooked by a bridge where we had good views of a Dipper preening, feeding, and swimming and a Grey Wagtail.

We finished the trip with a further visit to the Gouthwaite viewpoint, where Little Ringed Plover and Common Tern were added, before a ferocious hail squall sent most of us scurrying for the cars. Those stalwarts who remained clocked up several more species including Black Grouse (and were very smug next day) – bringing the total to a magnificent 65 species. (For a full species list, click here)