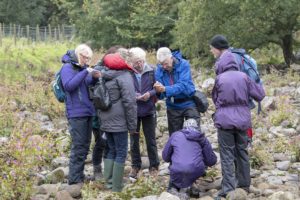 Ten members met at the car park near Manchester Hole in Upper Nidderdale. Starting in the car park and using the fascinating limestone landscape and lime-loving flora of the area, Nick demonstrated some of the essential features of mosses and liverworts, and explained the first steps towards unravelling their identities. Technical terms that split these small plants into major groups – acrocarpous and pleurocarpous mosses, thallose and leafy liverworts – were demonstrated using examples on the rocks, soil and trees of the area, including the pleurocarps Anomodon viticulosus, Kindbergia praelonga and Thuidium tamariscinum, acrocarps Fissidens dubius, Bryum capillare and Polytrichastrum formosum, and thallose liverworts Conocephalum conicum, Lunularia cruciata and Marchantia polymorpha. A brief descent into Manchester Hole fascinated us all with its profusion of ferns as well as mosses and liverworts. 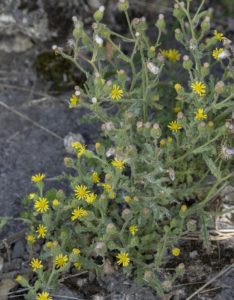 After lunch, our attempt to look at moorland flora around Scar House Reservoir was abandoned as the strong wind blew us back to the car park, so instead we headed down the valley to Lofthouse, where we spent some time exploring the flora on the rocky river bank. Here we found Musk (Mimulus moschatus) and very robust Procumbent Pearlwort (Sagina procumbens) in flower.  Sticky Groundsel (Senecio viscosus) was also in flower by the fire station.