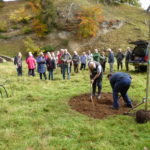 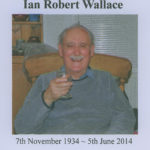 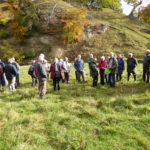 More than 25 people turned out to celebrate the life of Ian Wallace by witnessing the planting by members of Ian’s family of a wild service tree in Seven Bridges Valley, Studley Royal.
The tree was planted close to the spot where Ian discovered a naturally occurring wild service tree whilst conducting a plant survey for the National Trust.

The tree was delivered and the preparatory work undertaken by members of the National Trust Estate Management Team. They also erected a substantial deer-proof metal guard around the tree on completion of planting.
Colin Slator and Valerie Holmes represented HDNS Council, of which Ian was once a member, whilst Colin also attended in his capacity as Chairman of High Batts Nature Reserve Committee. Ian was for many years Mosses and Liverworts Recorder for High Batts as well as Botanical Recorder for HDNS.
He was also heavily involved in the Bilton Conservation Group which was represented by Keith Wilkinson, and in the University of the Third Age, many of whose members were present.
A stone inscribed with a replica of Ian’s signature was laid in the bottom of the hole and the tree was then planted by Ian’s widow Mavis, his son Nigel and daughter Fiona.

The assembled company was addressed by Mike Ridsdale of the National Trust, who paid tribute to Ian’s botanical work over many years on the Fountains Abbey/Studley Royal estate. Mavis then thanked all those who had generously contributed to make the tree planting possible and Mike and his team for their assistance and for allowing the tree to be planted on the National Trust estate. She finished by thanking everyone for turning out in such good numbers.
For those wishing to see the tree, it is on the right-hand side of the valley just past the second bridge over the Skell when approaching from the Studley Royal car park. 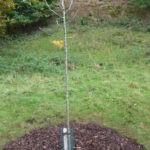 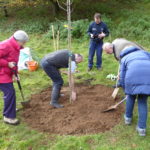 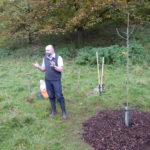