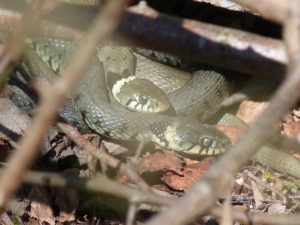 As some of us waited in the sunshine for others to arrive in the car park at King Rudding Lane, a very pale Buzzard flew directly overhead, with a pair displaying further away towards Selby.  Eventually ten of us set off for the “Bomb Bays” and a photographer in the distance alerted us to two Grass Snakes sunning themselves between a concrete ruin and a rose bush – utterly splendid views and lots of photos taken.  These snakes were a first for some and the first live British ones I had seen since I was a teenager.

Another photographer told us where he had been seeing Woodlark, a short walk away.  Whilst listening to a distant lark we saw Brimstone butterfly and Orange Underwing moth – spring at last!  The lark duly appeared singing splendidly, then landed on the crown of a small oak, giving us great telescope views before it dropped to a ditch side to feed, still in view.  We could not have asked for better.  Lunch was taken back at the car park before we left for Bank Island, Wheldrake, where we enjoyed a drake Garganey, Swallow and Chiffchaff with plenty of other wildfowl and some Snipe.  One or two then left us while the rest went to North Duffield Carrs where the scene was much more like winter with four Scaup, two or three Whooper Swans, two Marsh Harriers and lots of Wigeon;  Teal and Pintail for support.  All in all a great day out.  You should have been there!