‘Quality not quantity’ was the initial theme for our trip to Skipwith on Tuesday 25th March –I’m referring to the four members who accompanied our guide for the day, Colin, rather than the birds! The weather hadn’t shown great promise, (hence the small numbers?) but as we neared our destination things began to improve. 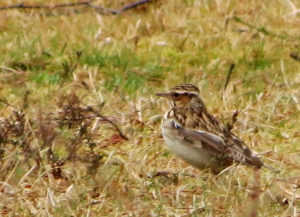 Or at least the Woodlarks thought so! As we peered through the drizzle amidst the continuous yaffling of some energetic Green Woodpeckers we heard the tell-tale sonorous, rippling sound of Woodlark. At first they were not visible, but our patience was rewarded when, after searching further afield, we were treated to a close sighting of a singing Woodlark on a nearby tree stump. Mike moved quickly to mount his camera onto his scope and managed to track the bird along the ground. Then the bird flew off so we made our way back to the cars with mutterings of ‘Lifer’ and ‘First Yorkshire Personal Sighting’ and ‘pure quality’

Duffield Carr was the next site and here we did indeed experience copious quantities of wild fowl. Some numbers were recorded, including 15 Ruff, over 20 Dunlin, 32 Whoopers, as well as multiple Gadwall, Pintail, Shovelers, Shelduck, Wigeon, Teal along with calling Snipe. It seemed that our trip today had been perfectly timed to greet the arrival of the Whoopers whose progress had been reported by various messaging services earlier in the day.

At East Cottingwith we heard our first Chiffchaff of the day and found plenty of Tree Sparrows. 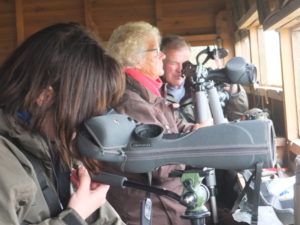 Our final destination was Wheldrake YWT where this winter’s bad weather had left its mark with demolished hides and jetsam-strewn walkways. The conditions didn’t seem to bother the local Water Rail as they conducted their territorial squabbles to the accompaniment of frenzied squeals. And although we didn’t manage to find the reported Great White Egret, we enjoyed the search. Before we left, we had more Whoopers and views of four Buzzards climbing a thermal and combing the skies above us. We finished with a decent number of species ( 63 in all ! ) and even a little bit of Gold (in the form of Goldeneye and Goldfinch!). Thanks again to Colin