11 of us assembled at the Bowlees Visitor Centre, it was especially good to see Liz our brand-new member on such an adventurous first outing!

The weather was not very propitious on this Tuesday morning, it was nearly raining and the forecast was poor. To add insult to injury we were assailed by a cloud of midges, but fortunately Charlotte was able to arm us all with military grade repellent!

However, once we set off, the profusion of flowers put the weather right out of our minds. (Note that only the highlights are mentioned in this report – a full list of the plants seen, with their scientific names, can be found by using the link below.) 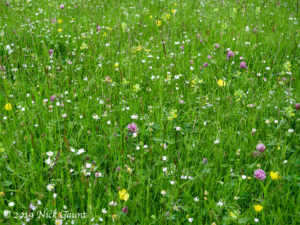 A stone’s throw from the car park had us admiring a typical upland hay meadow – according to the literature there are 120 plant species per field in this area, 30 species within arm’s reach! As we were the other side of a wall we couldn’t actually reach any of them, but we could easily pick out Yellow Rattle, Red Clover, Pignut, Meadow Buttercup, Ragged Robin, and a kaleidoscope of waving grass heads.

On down the path, we saw plenty of Lady’s-mantle but did not attempt to name it exactly – there are many microspecies of lady’s-mantle, three found only in Teesdale.

A little flush of water by the path yielded some aquatic mosses such as Fontinalis antipyretica and Cinclidotus fontinaloides, and also the fragile-looking Bog Stitchwort and Slender Speedwell.

Arrived at the River Tees, flowing strongly after rain, we found much of interest on the exposed limestone rock bed. Several sedges – Flat-sedge living up to its name – Meadow Oat-grass and Mat-grass, Quaking-grass and Sweet Vernal, and the curious Marsh Arrowgrass. There were striking white fossils in the wet black limestone – crinoids and belemnites, and a large brachiopod, according to the booklet called ‘Giganticoproductus’! The locals call this rock “cockleshell limestone”. 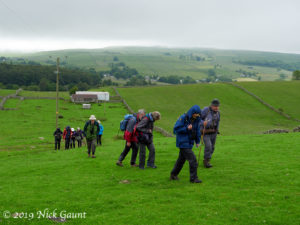 Members on the way to Holwick Scars

We now strolled up through several ascending meadows, flowery as before, and emerging onto a minor road encountered a different suite of flowers growing in the verges, such as Dame’s-violet, and Wood Crane’s-bill, with nearby Meadow Crane’s-bill so that we could note the distinguishing features. There were also Bistort and Borage, Comfrey and Columbine – some of these flowers being suspiciously close to the adjoining cottage gardens….

The road now continued as a rough track up into the hills, and we had a spectacular view of Holwick Scars, a continuation of the Whinsill, which is a Dolerite seam made of igneous rock which has been forced between the layers of Carboniferous limestone. This Dolerite is hard and so exposed by erosion at sites such as this and in the waterfalls of Low and High Force. The high point of this grassy hillside was a beautiful array of mountain pansies. Most were dark purple, some yellow, all facing the same way – a very tempting photographic subject! 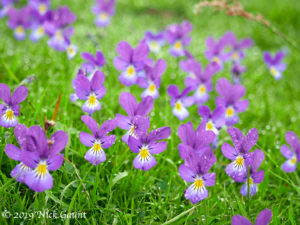 After lunch in a spot cunningly chosen by Richard to shield us from the now fairly persistent rain, we returned to the river by a different series of meadows where we were able to add some orchids to the list.

The return path by the river down from Low Force is one of the richest botanical sites in the area. Here was abundant Melancholy Thistle, not fully in flower, Alpine Bistort with its intriguing bulbils, Saw-wort, another uncommon plant, Goldenrod, and much more including various intriguing plants which were not yet in flower and so hard to identify. Spring comes late in upper Teesdale.

Finally back across the river, we returned to the visitor centre by various routes, passing the impressive stands of Good King Henry on the approach path. It had been a long day as we had been slowed down by the abundance and variety of the plants! Many thanks to Richard, our so-knowledgeable leader, without whom we would never have found, nor identified many of them!