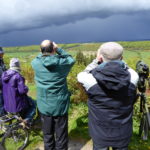 Watching the storm clouds. Will Rich

The forecast was for showers, some thundery with hail, but it was hoped we may escape some of them.  Having arrived at Wykeham, we watched the dramatic westward advance of storm clouds filling in the view over  Fylingdales Moor. We were still hoping to pick out a raptor in the sunshine at this point from our vantage point on the sunny side of the valley. Inevitably the storm caught up with us and Colin became insistent we retreat, with haste, to the minibus.  As if to impress upon us the urgency, an enormous crack of thunder helped clarify the situation!  Hefty hailstones accompanied the ensuing deluge. Had this trip been in March we might have been disappointed with the weather.  In May, we were astonished!

This was the pattern for the day, look, listen and make for the minibus! 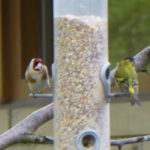 Goldfinch and ♂Siskin at Sutton Bank Will Rich

However, the species total for the day was an impressive 75.  Highlights were, from Sutton Bank, Siskin and Garden Warbler. Filey Dams provided Barn Owl, Little Grebe and Common Sandpiper and Cuckoo (heard). From Filey Brigg Country Park we walked along the top of the Brigg, the southern side of which has seen three recent landslips in the boulder clay.  On the northern side we saw a good variety of nesting seabirds, Fulmar, Kittiwake, Guillemot and Razorbill.  Even at a distance it is possible to see the sheer numbers of Gannets on the cliffs at Bempton. 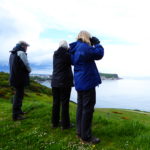 Watching the water Will Rich

Terns traversing the bay, reinforcing that it was in fact May, not March. The roofs of Harrogate may have been white over with hailstones and 3degrees showing on the thermometer, but we arrived home warm and dry, having seen some amazing weather.  The bird list was as varied as the habitats we had visited, despite everything.

Once again many thanks to Colin for leading an unforgettable trip to sites in North Yorkshire which were new to some members and favourites to others who have been there in better weather and know the magic of a day’s raptor watching at Wykeham.

Filey Dams from Hide Will Rich