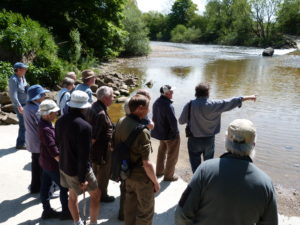 A good turnout of 18 members arrived at Bellflask on a brilliantly sunny morning to be greeted by Brian and Susan Morland.  Brian showed us around this fascinating gravel quarry which is being restored and is already a haven for wildlife.  He treated us to his robust views on habitat management (intervene as little as possible) and was extremely critical of the destructive practices which have severely impacted on wildlife over the past 50 years.  He showed us the agro-chemical polluted and wildlife-depleted River Ure which runs through the middle of the quarry.  By contrast the Bellflask lakes were pristine and full of life. 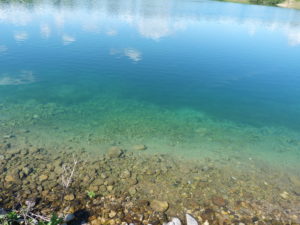 In the sunshine we were able to see into the depths of the crystal clear water, where trout and perch patrolled.  We also had close-up views of perch and gudgeon, Brian having netted some the day before.

He showed us the contents of his moth trap which were meagre due to a frost the previous night.  Nevertheless we were able to see some interesting species such as poplar hawk moth.  Later Brian pointed out an albino rabbit, which was a sight new to most of us.  After a couple of hours pleasantly spent some of us were beginning to feel the heat (that makes a change!) so we returned to the car park for our departure.  Many thanks to Brian and Susan for a splendid morning.