A workshop concentrating on mosses was organised in response to requests by society members who had negligible skills with this taxonomic group. 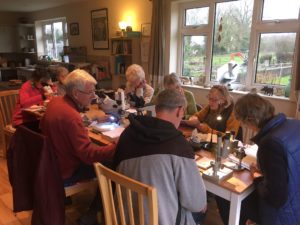 The full day workshop was led by Nick Gaunt and 8 members attended. A range of microscopes was provided to aid identification.

After an introduction we collected a variety of samples from the Staveley reserve itself and also a surprising variety from the area surrounding Muff’s house. Apart from morphological features, details of the habitat and substrate on which the moss grows are also important in identification, so these were noted on collection.
The main key used was the British Bryological Society’s own publication ‘Mosses and liverworts of Britain and Ireland’ Ed. Atherton, Bosanquet and Lawley, though other keys were briefly compared. The photographs in Atherton proved a useful check and the notes provided many useful comments about each species distribution, ecology and confusions. The most important task was understanding the terminology, particularly when terms appeared self evident but actually had quite narrow meanings in this context. Nick patiently assisted as we worked through the key with a number of species in small groups, developing our understanding in the process. Nick’s extensive ID skills have developed over a lifetime so the rest of us, now that we understand the fundamental terminology, require repeated practice and observation to ensure we progress.

Many thanks to Nick for sharing his expertise, developing our curiosity and being so patient with our questions.