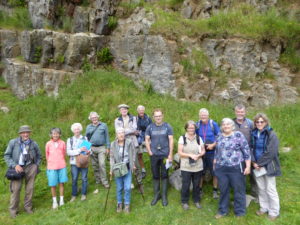 A splendid turnout of 15 enthusiastic botanists assembled at the entrance to the quarry on a fine sunny morning, under the leadership of the Head of Science of the BSBI, Dr Kevin Walker. The disused Duck Street Quarry is a habitat of both biological and geological significance that, in common with the lead mine which we visited later in the day, is a good example of how Britain’s old industrial sites have given us many important wildlife habitats.

As soon as we came through the gate we became aware of the richness and diversity of the limestone flora. Kevin amazed us all with his knowledge of the plants, not only recognising them from tiny portions, but giving us tips for identification, showing us the commoner grasses and sedges and how to recognise them, and demystifying some of the daunting yellow dandelion-type flowers. 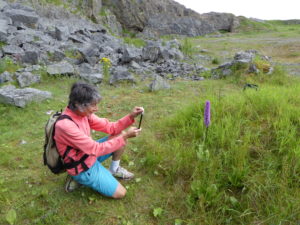 The naturalists scrambled up spoil heaps to admire frog orchids, ventured underground for close encounters with the pallid and starfish like green spleenwort, and viewed from a respectful distance the intractable genus of Hawkweeds. There is a full plant list attached, but other highlights and specialities included the delicate Knotted Pearlwort, Limestone Bedstraw – easily identified by its completely invisible backward pointing prickles – Brittle Bladder-fern and a truly gigantic Southern Marsh orchid, probably a hybrid, with a 20cm spike.

After such a dry season, mosses are not at their best, but some typical limestone specimens were found by Nick, such as Ctenidium molluscum, Entodon concinnus, Ditrichum flexuosus and the liverwort Scapania aspera.

The sun also brought out some butterflies – David’s search for a dark green fritillary was eventually successful; there were flocks of Common Blue males (where were the females?), also Green-veined White, the increasingly rare Small Heath and many Ringlets and Meadow Browns.

After lunch we walked to the disused lead mine in the valley bottom, on the way admiring (with binoculars) a stand of Melancholy Thistle; less popular was a narrow track completely full of shoulder-high nettles, a challenge for those wearing shorts! We walked down the moor to the beck, over typical moorland vegetation dominated by Heath Rush, to reach the old lead workings, where the challenging conditions favour certain tolerant species such as Leadwort and Spring Sandwort. Remarkably, Kevin managed to find what was apparently the only example of Leadwort (or Alpine Pennycress) which was easily visible – with a powerful hand lens. Other specialities found here were Mossy Saxifrage, Rustyback Fern and Rigid Buckler Fern, and the moss Philonotis fontana which grows in waterlogged areas.

Finally we climbed out of the valley, all feeling we had learned a great deal and thoroughly enjoyed ourselves. Many thanks to Kevin for his very knowledgeable leadership and instruction, and to Colin Slator for kindly giving us access to the quarry.