Storm Hector blew itself out during the early evening to leave a perfectly calm night for the trip. The wild weather had greatly weakened the midge population which was a bonus for us, but the lack of moths, the food for Nightjars, was a concern. 16 members joined Mike Smithson for the walk up to the clear fell area. Before the sun went down Tree Pipits entertained us with their parachuting antics and as dusk gathered the Woodcocks began to rode.

There were several sightings, quite a few coming very close to the group and giving excellent views of their distinctive profile and rapid wing beats. As darkness fell and the sunset faded, a single Nightjar gave us good views and started to churr quietly. There followed sightings of a pair sitting on a dead tree outlined against the sky. The churring started up again and in the increasing darkness a single bird was observed again outlined against the ever darkening sky. The track back to the carpark was thankfully made from limestone chips which showed up well in what by now was total darkness, approaching midnight. 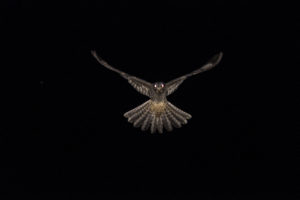 Thanks to Mike for leading.
Search our Site
BROWSING SUGGESTION:
View our Photo Gallery
[Click here...]
Tweets by @HDNSFarnham
Supported by: