HDNS Mammal Recorder, Richard Stobbs, set traps the previous evening and early arriving visitors, including some youngsters, were able to walk round with Richard to watch him open the traps. The species captured were 10 Bank Vole, 5 Common Shrew and just one Wood Mouse. 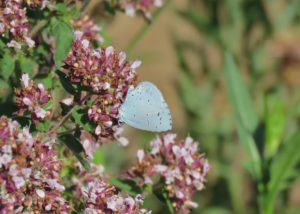 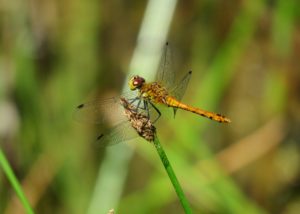 David Alred showed visitors several Dragonfly and Damselfly species. These included Ruddy Darter and Common Darter which were on the lake and also at the pond and we had good views of them. Black-tailed Skimmers were flying low over the lake. We saw an Emperor female laying her eggs directly into the lake. The male was close by fertilizing the eggs as she laid them in the water and making sure no other males came near. Emerald, Common Blue, Bluetailed and Azure Damselflies and Common and Brown Hawkers were also seen.

The flora is struggling in places this year due to the hot dry weather. In spite of this there have been some good numbers of Pyramidal Orchid and also scattered patches of Bee Orchid and just one Fragrant Orchid. Twayblade and Common Spotted Orchid have been present in good numbers. All were over before Open Day. The Reserve still has quite a lot of colour with Field Scabious, Tall Melilot, Knapweed, Agrimony, St John’s-wort and Upright Hedge-parsley. Plants of note are Equisetum Variegatum, Variegated Horsetail. First recorded in 1986 and found again in 2015. The only locality in the HDNS study area and lowland parts of vice-county 64. A full list of Farnham plants is available on the website. 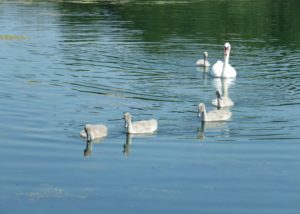 A pair of Common Terns were feeding two chicks on the platform, bringing in small fish at regular intervals. A late breeding Little Grebe was on its nest and the Great Crested Grebe had a small young one on its back. The Sand Martins were having a good year thanks to the weather and occupying the wall for a second brood. A pair of Reed Warblers with a nest in the Phragmites bed were feeding young and Blackcaps and Chiffchaffs were still in song.