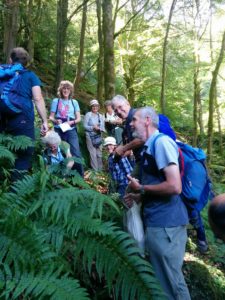 Upper Nidderdale was a known fern hotspot to the Victorians, who dug up specimens for their ferneries, unfortunately causing the decimation and even local eradication of some rare species in the process. However there was still much for us to see.

We walked to Fish Pond Wood for instruction from Kevin on the fern life cycle, morphological features, habitats and tips on how to identify common species, illustrated by the examples surrounding us. We then continued to Skrikes Wood for more unusual species including beech fern (Phegopteris connectilis) and oak fern (Gymnocarpium dryopteris).
Interesting sedges, rushes and other plants were also pointed out.

The wood contains deep ravines which we negotiated after a somewhat perilous and exciting adventure scaling collapsed giant boulders and decaying trees. Everyone delighted in observing Wilson’s filmy fern (Hymenophyllum wilsonii) growing in its highly specialised habitat at the end of the assault course.

Leaving the wood we sidetracked to see a large area of chickweed wintergreen (Trientalis europaea). 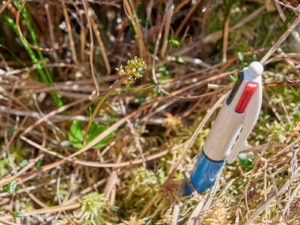 The final treat was a visit to Heyshaw Moor for a completely different flora including lesser twayblade (Listera cordata) growing in saturated sphagnum despite the weeks of drought. It survives in a tiny moorland island surrounded by species poor grouse moor where managed burning prevents growth of most plants.
Thanks are due to Kevin for sharing his encyclopaedic knowledge and time so generously.
See separate species list for a fuller recording of what was seen.