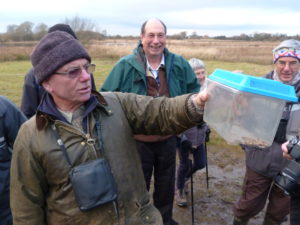 A good number of members (seventeen) turned out for the first, mercifully dry, field meeting of the year.  This was very gratifying for our leaders, Colin and Brian, who had put in a considerable amount of work placing and setting the twenty-nine mammal traps.  Colin was his usual jovial, witty self as he gave a very entertaining introduction to mammal trapping.   He also had some Barn Owl pellets and a display board showing the skeletons of the typical species on which they prey.  Meanwhile, Brian arrived with a Bank Vole and a couple of Wood Mice, the latter of which escaped into the car park and  ran off.  We were not disappointed, however, as once we were in the reserve, we had ample opportunity to inspect and photograph several other Wood Mice.

Colin showed us his collection of mammal and bird traps, some of them now illegal,  and gave a quite horrifying account of the huge numbers of Stoats and Hedgehogs are trapped and killed by gamekeepers.

The main species trapped during the day was Bank Vole but we were also able to see Common Shrew and, the highlight, a Harvest Mouse.  Bank Voles and Wood Mice seemed content to sit on people’s shoulders for a short while whilst being photographed.

All mammals were released back into the areas where they were trapped  Colin also showed us skulls of various larger mammals, including Grey Seal, as well as casts of footprints.    No larger mammals were seen, despite traps being set for Water Vole and Mink, though there was evidence of Otter.  Many thanks to Brian and Colin, also to Bobby Evison and YWT for allowing us to place the traps on the reserve.