Despite the dire forecast of persistent rain, six hardy members met our leader Bob Orange at West Tanfield for the onward journey to Bellflask, which is a working Hanson Heidelberg gravel quarry in process of restoration for wildlife.

Luckily for our party the rain failed to materialise and we had a very pleasant walk accompanied by Brian and Susan Morland, who live on-site where they run a trout fishery and also record the wildlife to be found there, including extensive moth trapping. 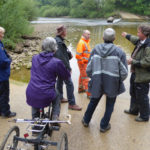 At Bellflask we were joined by Bob’s No. 2 Richard in suitable camouflage gear and his son Harry, who seems to be taking an interest in the natural world. These youngsters definitely need encouragement – there are too many of us old fogies in the conservation movement and we’ll soon be pushing up daisies, so we need the younger generation to take up the baton. Apologies for the mixed metaphors but you get the message!

Bob, who manages this quarry amongst others, showed us how the gravel is extracted and water levels are managed, whilst Brian gave us the conservation angle. Brian always has some interesting views and he was particularly critical of the propensity of some managers of nature reserves to put tit nest boxes up everywhere. He felt that this was detrimental to the tits themselves and led to an imbalance. When the food ran out the tits would be unable to feed their chicks and the invertebrate population would have suffered severe losses.

The working quarry at Bellflask supports good numbers of Sand Martins (c350 pairs) and nesting Oystercatchers and Little-ringed Plovers. The restored gravel pits are home to Great-crested Grebes and other water birds, with the reed beds supporting Reed and Sedge Warblers, Reed Buntings and the occasional Bittern. Avocets and other waders also breed. Harriers, Ospreys and Little Egrets are regularly seen on passage. This is an ever-changing environment but nature takes advantage of the niches it provides. We are lucky that Bob, who is a keen naturalist, is in charge of developments at Bellflask, though I should add under Brian’s critical eye!

Brian on his Naughty Step Will Rich 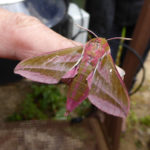 During our walk Brian showed us the contents of one of his moth traps, which included the beautiful Elephant Hawk Moth. He also let us enter his sanctum, the so-called naughty house, where he can work on his projects in peace listening to his favourite sixties music.

Many thanks to Bob, Brian and Susan for a very enjoyable and informative morning.

NB Click on a photo to see at full size. Use the back button to return to this page.