Ornithologically speaking, September on the north east coast is a good month for migrants and sea watching.  An easterly wind and a rough sea is ideal but when we arrived at the Headland the sea was flat calm and the wind which had been in the east for days had deserted us.

However there were waders and gulls on the shore to sift through and reports of Yellow-browed Warbler at the Borough Hall. There was plenty of choice for everyone and the party spread out depending on their interest.

Interest quickly concentrated in the Borough Hall for the Yellow-browed Warbler.  Still in full leaf, the trees provided this lovely little gem with plenty of cover, flitting Robins and Chiffchaffs keeping us on our toes. But persistence paid off and we had several excellent views eventually, complete with the eye stripe and wing bars.

A brief stop at the beach at Newburn was amazing for comparison views of three Tern species,  Sandwich, Arctic and Common standing among the Oystercatchers.  The white winged Mediterranean Gull among the smaller Black-headed Gulls provided another good comparison view.  Colin was eager to show us the recently drained Dorman’s Pool and new hide.  Waders were certainly gathered in numbers, mainly Dunlin, also Black-tailed Godwit, Greenshank, Ruff and two Little Stints, one right in front of the hide. Rob Adams spotted a Whinchat and a pair of Stonechats around the fence posts. 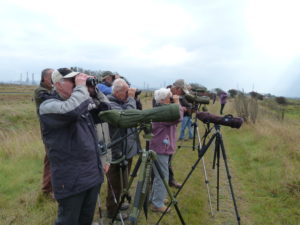 “I spy a Great White Egret!”

Little Egrets are now almost ubiquitous in marshland habitat but it’s the Great White Egret which has the scarce but increasing status which the Little Egret had fifteen or twenty years ago. Colin’s pager flagged up that we were only a few wing flaps away as the Great White Egret flies, which had been seen around Cowpen Marsh recently.  Sure enough we located it quickly and saw it fly briefly. Their size makes them unmistakable, especially in flight.  All this and we hadn’t even been to RSPB Saltholme yet.

The fox cubs seen earlier in the year at Saltholme are now fully grown and very evident, much to the delight of visitors and photographers.  The hides at Saltholme are roomy and well appointed, as is the coffee shop, and we finished our day equally divided amongst them.

Winter ducks are starting to assemble, Wigeon, Teal, Pintail, Shoveler and a Red-crested Pochard in eclipse, just to test us! Waders included Golden Plover, Dunlin and Lapwings and Snipe but with fading light levels and the reserve about to close we headed off back to the minibus and home, pencils poised to tick our life or year lists.

Many thanks to Colin, the man with the plan and Will, the man not so much with the van, but a very nice new minibus actually.   A great day out!