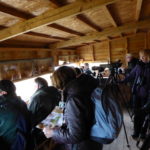 Our party of thirteen set off from Trinity Church in overcast weather, hoping for a dry day.  In this, however, we were to be disappointed since, shortly after we arrived at the Potteric Carr Yorkshire Wildlife Trust reserve, the heavens opened and subjected us to a thoroughly miserable couple of hours weather-wise.
The birds brightened our spirits somewhat, especially when we heard Cetti’s Warbler singing and Bittern booming.  Later we had good views of a pair of Black-necked Grebes and a drake Garganey. 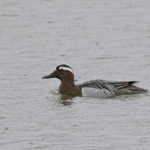 A brisk march through the puddles took us back to the minibus for lunch, following which we set out for the National Nature Reserve at Hatfield Moors.  The hide near the entrance yielded little, which was not surprising given that a couple of yobboes in two cars were spinning their  tyres on the car park gravel and then let out a couple of barking dogs which were allowed to run free around the reserve.
The rain had abated somewhat by this time as we walked to the viewpoint overlooking the bleak expanse of peat bog which is the main feature of this Natural England reserve. 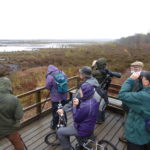 Unfortunately there was little to see apart from a drake Mandarin Duck which gave good views.  Barry got bitten by an insect, of which there were many.
Retracing our steps to the car park, Colin got wind of a Little Gull which was supposed to be present at a nearby lake.  However, by the time we arrived it had disappeared, which was our signal to turn for home.  After a brief coffee stop in Hatfield village we joined the motorway network and headed for Harrogate.
Sue totted up the species total for the day which was 66, surprisingly good considering the weather.  Many thanks to our driver and leader Colin for doing his best in trying conditions.