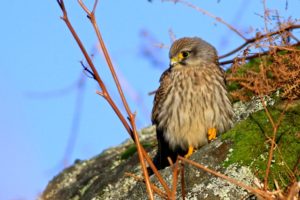 Saddleworth Moor, despite its grim reputation, was looking beautiful in the bright sunshine as we arrived at RSPB Dove Stone.  Walking up Chew Road towards Chew Reservoir we were treated to excellent views of a female/juvenile Kestrel which perched for long intervals on a rock beside the track.  Further along, our keen-eyed leader Colin spotted far off across the moor a white blob which, to the unpractised eye, might have been a stray plastic bag.  Looking through the scope, however, this was definitely what we had mainly set out to see – a Mountain Hare in full winter regalia.   Shortly afterwards, on the other side of the track, we obtained much better views of an equally beautiful animal, which provided some good photo opportunities.  The hare seemed unperturbed by a helicopter which was passing almost directly overhead transporting stone to fill in the moorland grips (drains).  A huge area of the moor is now managed by the RSPB and there are healthy breeding populations of Dunlin, Golden Plover and other waders. 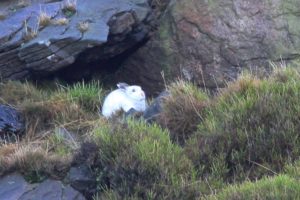 Colin’s pager was now beeping repeatedly, telling him that there were Two-barred Crossbills (quite a rarity) at Broomhead Reservoir on the other side of the Pennines near Stocksbridge.  We set off in the minibus along the A635, past those places which will live forever in infamy, towards Holmfirth, then along some tortuous country lanes to Broomhead.  Unfortunately, it was the usual, “You should have been here an hour ago,” because the birds were nowhere to be seen.  They had been there since August and are there still (14th January).  In fact, the more enthusiastic of  our members have been back subsequently and seen them.   As it was now beginning to get dark we had to give up the hunt, return to the minibus and wend our way home.  Many thanks to Colin for “delivering the goods”  yet again (at least as far as our main quarry, the hares, was concerned).