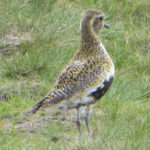 After an operation worthy of the Royal Logistics Corps 10 walkers started from Kettlewell to trek over Great Whernside, back to Scar House. After a quick scan of Gouthwaite Reservoir for a reported Red Phalarope  –  operation Dotterel began. 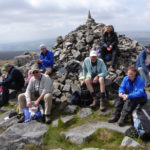 We summited about 11.45 after the steep walk up the Wharfedale side, stopping to watch the first of several Golden Plover, a striking bird in summer plumage, and we examined some interesting plants including a club moss.

Kevin Walker, HDNS Botanical Recorder, has surveyed the Great Whernside area, so using the list he produced we tried to identify as many as we could. 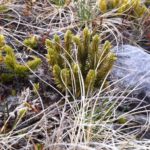 As we lunched at the trig point Colin heard a Dotterel flight call, and looking up, we saw the bird fly over and land some way off. This was the wader we had been most hoping to see, as they are rare, or at least under reported, for this area. They are more likely spotted on the neighbouring, more frequented hills of Ingleborough or Pendle each May as they migrate up to their breeding grounds further north. They are a confiding bird on the ground and can be approached quite easily, but first you have to find them!! This proved impossible on this occasion as we were unsure where it came down.

The top of Great Whernside was surprisingly hard and dry with rain run off evident. Fences have been erected in an effort to eliminate over grazing. We were pleased to see a female Dunlin, which was obviously protecting young.

As we descended into Nidderdale more Golden Plover and Curlew were viewed but there were far more waders breeding around the reservoir and moorland edge than on the upper moorland. Lapwing, Redshank, Snipe, Oystercatcher and Common Sandpiper and Wheatear were seen.  As well as the ubiquitous Meadow Pipit we spotted a rather less obvious male Ring Ouzel, singing in a tree across the valley and a distant cuckoo was heard.

Our day finished as it had begun on the shores of Gouthwaite, with great views of Red Knot, Ringed Plover and  Little Ringed Plover. Raptors were scarce, only one buzzard the whole day!

Many thanks to Muff Upsall and Clare Slator for their help in getting cars in place for the beginning and end of the excursion. Also thanks to Colin for the planning and leading a really great day, with a total bird species of 64 and a good botanical tally, with Dan McAndrew and Sonia Starbuck doing the identification.