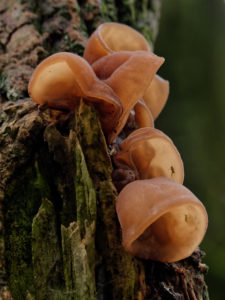 Our day in Hackfall Woods got off to a promising start, with the morning’s weather being mild and bright. A group of twelve of us set off (one was following) with our fungi books, magnifying glasses and packed lunches at the ready.

Although Hackfall appears to be a natural wood, the landscape is in large part a result of design and work undertaken by the Aislabies in the eighteenth century. It is now an English Heritage Grade 1 listed garden.

We had scarcely left the car park when we had our first fungus sighting – Ergot Claviceps purpurea formed in the inflorescences of some of the grass. It is very poisonous. We did not need to venture much further before finding other species such as Jelly Ear, Angel’s Bonnet, Elder Whitewash, Honey Fungus and Turkeytails. Several of these were growing on dead elder trees. Nearby, found on ash were Cramp Balls or King Alfred’s Cakes Daldinia concentrica. Then we found Dead Man’s Fingers and Candlesnuff, weird and creepy fungi to find at this time of year around Halloween.

We lunched on Kent’s Seat at Alum Spring, where we also had the chance to admire the lichens, ferns and mosses which were growing very profusely around us. As well as fungi we had a few diversions such as tiny tree snails and slime mould.

We then found more of the dreaded Honey Fungus Armillaria mellea. This is a dangerous parasite of trees and shrubs and spreads by long, black cords resembling bootlaces. Other common fungi included The Deceiver (so-called because of its variable appearance, not because it is poisonous), Sulphur Tuft, Common Inkcap, Oak Stump Bonnet and Coral Spot. 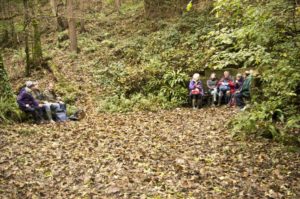 In total we found 44 fungi. A few of us were interested in tasting the edible species (although this did not apply to me).
Later in the afternoon it began to rain and as we headed back towards the cars it rained more and more, and the paths became very muddy. Fortunately, our health and safety contact telephone numbers were not required and we each got back in one piece. The rain certainly did not spoil our day.

Many thanks to our leader, Andy Woodall from the Mid-Yorkshire Fungus Group, for a lively and entertaining day of mycology, and for patiently answering all our questions. I was sorry that we did not find any magical Earthstars (my favourite fungi) but those can wait for another day.
Sonia Starbuck 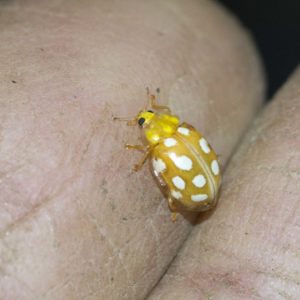 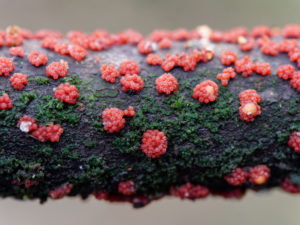