This should be re-titled as , ‘Signs of Spring in Ripon’………

A group of eight members, including Leader Colin, set off by car to scour the Ripon area for the target species. We were being guided by Colin’s intimate knowledge of the patch he has worked all his life. Starting at Skelton-on- Ure, we quickly came across Hares which were easily visible in the large rolling fields. Training our binoculars to follow the beautiful sounds that filled the sky we were delighted to find three Skylark. These birds continued to appear at nearly all locations throughout the day. Other species to be found here were flocks of Fieldfare and Yellowhammers. This location also gave us our first sighting of Buzzard – again a bird that seemed present all day- but this was a nesting pair! 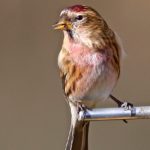 Moving on to land near Marton-le-Moor we examined a muck heap ( apparently one of the few places a bird can find seed in today’s farm land – even if it has been previously digested by cows). We were rewarded by finding a small flock of Corn bunting along with Chaffinch and Yellowhammer (a Wren, a Greenfinch and two Robin were also present at this little oasis!). Nearby was another site with panoramic views to the west and north allowing us to see as far as the Dallowgill moors where the heather was being burnt. Here we had more close views of Hares and distant views of Buzzard, Lapwing and Gulls in large numbers on wetlands along with two Shelduck.

We had lunch on home territory at High Batts accompanied by Marsh Tit, Redpoll, Siskin and Great Spotted Woodpecker (as well as the usual suspects). On to Middle Parks (Mistle Thrush on the way) where Colin pointed out the effects of adverse land management and its impact on wildlife. Our final port of call was Middle Farm at Ripon Parks. The once thriving habitat of the lake is now surrounded by an Otter fence. However, we were able to find Teal and Tufted duck as well as Shelduck ,Canada Geese and Moorhen.  We were able to exercise our sleuthing skills in working out the architects of numerous old nests visible in the hedgerow ( with Richard’s guidance). An interesting log pile peppered with beetle holes and matching Woodpecker drills also captured our interest. The main species of interest however was a flock of Linnet , initially fairly camouflaged amongst the keys of an ash tree, but undermining this by the amount of chatter that the flock was making. Other finches were mixed with the flock – the most notable being a Brambling. As we made our way back to the cars, our departure coincided with the arrival of six Curlew and a Kestrel. To round things off nicely, as we said our goodbyes at Quarry Moor and thanked Colin for a brilliant delivery of all target species, a female Sparrowhawk flew over.