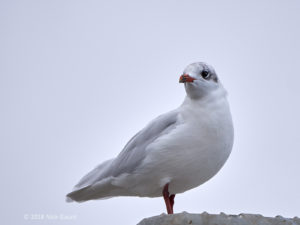 Sea-watching began at 9.15 a.m., as soon as we arrived at Hartlepool Headland: high tide was at 8.15 a.m., which brought the seabirds closer to us. Razorbills, Common Guillemots and three Red-throated Divers were soon found. There was a continual movement of Common and Sandwich Terns offshore, with Gannets moving through constantly and packs of Common Scoters flying north. The local birders were helpful in alerting us to a Peregrine Falcon over the sea which gave an exciting display as it chased Fulmars and Kittiwakes.
Some of our members had taken a walk along the front where they found a Whimbrel on the rocks, unfortunately it took off before the rest of us arrived, but Turnstones were seen by all and Eider Ducks were located in the harbour entrance. As the local gardens were very quiet for passerines, we left for Newburn Bridge which was our lunch stop. Sanderlings were on the beach, Ringed Plovers, Dunlins and more Turnstones were found among the rocks. This location is the most reliable wintering site for Mediterranean Gull and, just before we left, one was seen. A few leftover lunch crumbs thrown out brought it down to give us good views, which pleased the photographers. 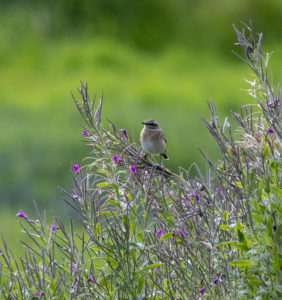 A view through the telescope to our next stop at distant North Gare, revealed an Arctic Skua, our next target species, chasing a seabird. Seaton Common and North Gare are always worth a visit, for Whinchats particularly. The initial quick scan was negative, but the Arctic Skua was found as it flew briefly chasing a Sandwich Tern, before settling on the water for the duration of our stay as the Sandwich Terns present failed to catch any food to attract the skua to move. Some members walked to the shoreline where they found a Wheatear. As we returned to the car park, one of our photographers showed us a picture of a Whinchat which he had just taken and so we aIl began to search for the bird and eventually found two. 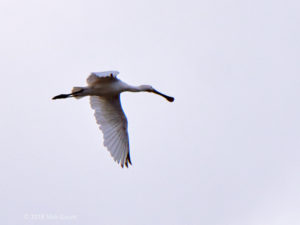 Our next stop was RSPB Saltholme Reserve from where there were reports of Curlew Sandpipers and Garganey. The female Garganey was found, along with Black-tailed Godwits and Little Egret, from the Phil Stead hide. The staff informed us that the main hide was closed during the building of an upward extension and so our only option was to view the main pool from the main road. A Merlin perching on the ground was pointed out to us by local birders. Ruff and Golden Plovers were seen but the Curlew Sandpipers were elusive. A shout of ‘Spoonbill’ had us looking up to see it flying across the pool giving us great views. The Merlin took off disturbing all the waders, which was fortunate as then a Curlew Sandpiper was found close by the road, giving everyone excellent views. A satisfying end to a good day’s birdwatching. 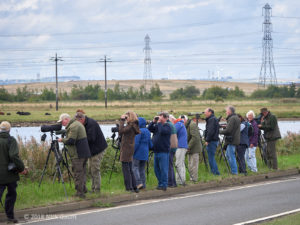 A total of 70 species was a credit to the efforts of all the members; we were short on passerines more of which may have been added with a walk around Saltholme, but we concentrated on quality species.