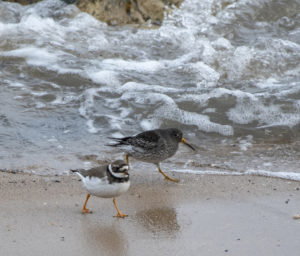 We arrived at Hartlepool Headland as the tide was going out, parking in an area where the rocks were exposed. The usual Turnstones were in good numbers and the wader everyone hopes to see, a Purple Sandpiper, was quickly found; they have been more numerous this winter all down the east coast. Also seen were Curlew, Common Redshank, Ringed Plover, Sanderling and Oystercatcher.
On the sea, large rafts of Common Scoters were seen, also groups of Great Crested Grebes and several Red-throated Divers. Further along the headland, three Shags gave close views and 20 Eider Ducks were counted. A short stop at the Marina, which is always worth a look, produced a drake Red-breasted Merganser.

Whilst we had lunch at Newburn Bridge, the usual Mediterranean Gull and more Great Crested Grebes were seen.

The next stop was at Seaton Common NNR and North Gare but, because of a cold and very fresh wind, the Short-eared Owls were keeping their heads down. We walked to North Gare and the estuary where a Grey Plover was found in a tidal pool. Moving to the newly revamped Greatham Creek car park and viewpoint, we found that looking through a metal screen over the new flood pain was difficult, but a Marsh Harrier was seen briefly and a Little Egret flew into a creek and disappeared. A walk to Seal Sands was discounted due to the state of the tide and so we moved onto the RSPB Saltholme Reserve. 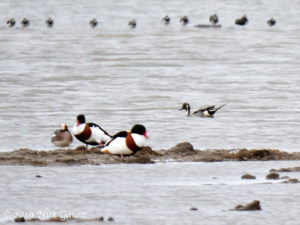 As we walked down to the Main Hide, a Peregrine Falcon flew over putting up all the birds from the ground. From the hide, Pintails, Shovelers, Goldeneye and a good flock of Barnacle Geese were seen. The new upward hide extension of turret design, did not impress and was not birdwatcher-friendly; one of our members was not pleased when her tripod leg was bent as it became stuck in the internal iron railings!


A good day overall and a good team effort to produce 70 species in the far from ideal conditions.