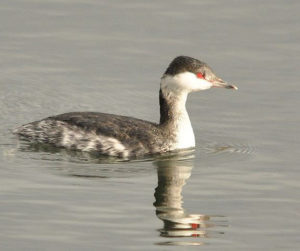 As usual, a sprinkling of snow led to traffic chaos in Harrogate and we were 30 mins late setting out.  The snow fizzled out north of Ripon and it was a beautiful sunny day when we arrived at Hartlepool.  It was high tide at the Headland and we were treated to the sight of a raft of Common Scoters very close inshore.  Further out there were Red-throated Divers and Great-crested Grebes, as well as a Harbour Porpoise.  Walking along the sea wall we enjoyed close-up views of Purple Sandpipers, Knot and other waders; sheltering behind a breakwater were many Eiders.  Moving along to the fish dock, we were disappointed in our quest for white-winged gulls and the only bird of interest was a Red-breasted Merganser.  At the Marina we obtained excellent views of a Black-throated Diver (a “lifer” for me) but the hoped-for Slavonian Grebe did not materialise.   At Seaton Carew lunch was shared with a couple of Mediterranean Gulls who were eager to swoop on the titbits offered and gave excellent views.  Luckily, the only shower of the day occurred whilst we were sitting cosily (ha-ha!) in the minibus, though we never saw the sun again after lunch.  Whilst walking towards Seal Sands we were lucky enough to see a hunting Barn Owl;  Greenshank, Stonechat and Rock Pipit were also “bagged”. The biggest treat was in store when we arrived at the hide, from which Sue spotted the elusive Slavonian Grebe (another “lifer” for me), which was very obliging, demonstrating all its salient features.  Later, at North Gare we missed out on the large flock of Snow Buntings, which seemed to have absented themselves from their usual haunts.  Pursuing a tip from a local birder that there was a large number of Long-tailed Ducks at Dorman’s (?) Pond, we bypassed Saltholme and went thither, only to find that said L-t D were in fact Pintail – a pretty sight, but not exactly in the same league.  By this time Saltholme was closed so we departed for home, very pleased with our final tally of 66 species.  Many thanks to our leader, June, for keeping us in order and finding so many interesting birds.

Note: Thanks to Mike Neate who kindly agreed to let us use his photo as an example.