After a weekend of grim easterly winds off the North Sea, the day dawned warm and spring-like, with a very light breeze and broken cloud. On arriving at Hartlepool Headland, we noticed the sea was still very agitated, but with a receding tide we  started scanning the intertidal zone for waders.

This was easier said than done as there were very few, and no Purple Sandpipers to be found, just Oystercatchers, Turnstones, Redshank, Curlew, Ringed Plover and a single Knot. There were Eiders, Common Scoters, Cormorants and a Red-throated Diver on the sea. 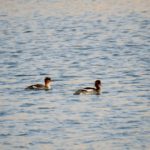 With rough seas, it is often wise to check the marina at Hartlepool for sheltering birds and so it turned out to be :splendid Red-breasted Mergansers, one male and two females.

We then sent Mike to talk his way into the Fish Dock, a quick resume of health and safety near deep water and we were greeted with a lovely 1st winter Iceland Gull and soon afterwards, were watching two beautiful Great Northern Divers.

Our next stop was Newburn Bridge for lunch and Mediterranean Gulls. We had excellent 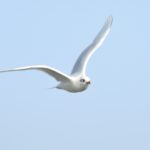 views of the gulls, especially when they noticed we had brought our lunch with us. They are gulls after all and will readily swoop uninvitedly for food and for us birders, close up views of a white winged gull isn’t to be missed.

At Saltholme we were disappointed that the Long- tailed Duck appeared to have moved on, but were consoled with a male Pintail, some 70 White Fronted Geese, huge flocks of Curlew, Wigeon, Golden Plover and Lapwing. Two Short – eared Owls and a Stonechat were seen along the Kestrel route, oh yes and a Kestrel, what else? 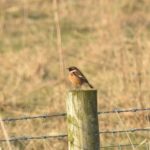 Our thanks to June for leading a great day out and our driver Andrew, who was patience personified as he parked here, there and everywhere as we pursued our quest, totalling well over an amazing 70 species.  Bird List.pdf