It is now becoming something of a tradition or pattern that I organise some birding (other biological orders are usually hidden away at this time of year) on some date in December, within the Society’s area and with some eatery nearby. And so it was that on the 11th December at 9am 16 members of the Society met outside (yes) the Black Lion in Skelton, just NW of Boroughbridge. The heavy cloud cover made for moderate light conditions but at least it was dry and with little wind. 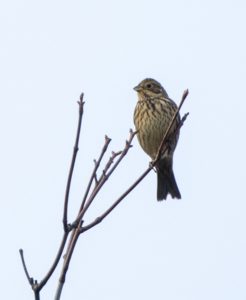 We first of all explored the intensive arable fields just outside the northern end of the village, with the intention of finding some bunting and finch flocks. Walking on hard farm tracks, some under a Stewardship access scheme and others on PRW. Looking across some active sheep breaks (fattening sheep fenced on stubble turnips) we spotted, at distance, some large flocks of Woodpigeons which eventually alighted in tree tops. Whilst looking at these pigeons we spotted several flocks of smaller birds whirling around over some standing barley, left around a field headland probably to hold game birds. Some of these smaller birds eventually landed in nearer large deciduous trees and we could get a look at them through bins and scopes; and to the delight of us all these birds proved to be Corn Buntings and lots of Yellowhammers. After a good look we moved on nearer and in so doing flushed some Red-legged Partridge and a Hare, as we set off. A Red Kite flew low over a distant field and probably had disturbed a lot of the small birds we suddenly started to see – a single Song Thrush, a nice flock of Linnets flipped over the hedge and out of view, some Redwing and then more, and nearer, Corn Buntings and Yellowhammer. On reaching the barley headland more finches were seen closer, also a Tree Sparrow, a Great Spotted Woodpecker and a covey of 13 Grey Partridge took up near us and landed out of sight in the middle of the stubble turnips. As time was of a premium at this stage I decided to walk back towards the village diagonally across a ‘bare’ field and was pleased to find up to 60 each of Linnet and Pied Wagtail with a few Meadow Pipits mixed in. Back in the village a Jay was seen to drop into someones garden feeders – in my lifetime I can recall the ‘keeper’s gibbets’ in nearby woods full of Jay (and other) carcasses. 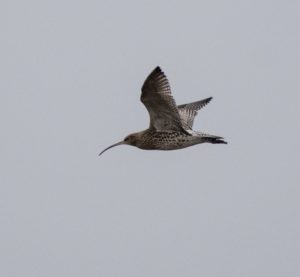 Back to our vehicles and a short drive to the parking area, adjacent to Hewick Bridge. En route some of the group had seen about 80 Lapwing in a winter corn field. The bacon butty/café trailer on the parking area was tempting but resisted, by all! We then proceeded to walk down river to look at the ex-quarry site and large developing reed bed soon to be handed over to the YWT come March next year. This site looks like an exciting habitat but little was seen over or in the reeds today. On the open water 40 odd Tufted Ducks, about a dozen Gadwall, four Goldeneye and eight Shoveler were observed. Eleven Cormorants were loafing on the dry spit. On the walk back to the cars, along the riverside, a few Long-tailed Tits were seen whilst looking through the alders for finches. A resting Buzzard was observed being harassed by a Carrion Crow. But the highlight was a flock of 43 Curlew coming low and calling – wonderful to see and listen to.

From Hewick Bridge a short drive towards Ripon and into a parking area near the Canal Marina allowed us to make a quick and short walk down the Canal side, to what is known locally as Nicholson’s Lagoon. In some winters this site can hold a substantial Starling murmuration – but not this year, and anyway we were too early in the day. But, as usual, this site always seems stuffed with birds, mainly waterfowl. Over a hundred Mallard, six Shoveler, a single Shelduck, four more Goldeneye a few Gadwall and six more Cormorants; a Snipe put in a brief appearance. It was obvious here and at the previous site that no geese were in evidence at all. 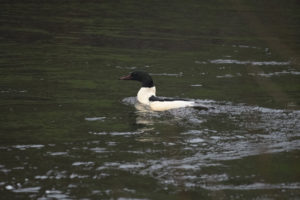 Time was moving on (13:00 hrs) and so back to the cars and make for the Weir Car park at Langthorpe (Boroughbridge) for a quick stop at the weir and search for any Goosanders lurking below, in the river. The drive from Skelton to Langthorpe, through some arable farmland produced two Red Kites, a Buzzard and a Kestrel. On the river bank near the weir, some lucky members of the group had a Kingfisher nearly take their hats off as it made from the river to the Canal. Initially no Goosanders could be found near the weir but three were found below the bridge – the drake in the group then flew upriver, landed and drifted back down stream, right in front of the happy photographers. 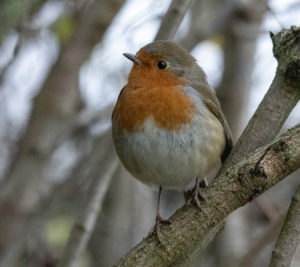 Just before 2pm all sixteen of us plus one other arrived at the Royal Oak in Staveley for a splendid lunch and convivial chat. After which, feeling replete, some of the group departed, but some hardy souls stayed on, and departed in the murk around the Staveley Nature Reserve hoping for a sighting of Barn Owl; six of us were soon rewarded with an observation of a perched bird in the Orchard and nearly in Muff and Jacks garden! A walk out to the Public Reedbed Hide and back produced another Barn Owl and two Water Rails seen from the first Hide. By this time, on the edge of darkness, an offer to call around at Muff and Jacks for mince pies and coffee was too tempting. So the six of us called around, and with other members of the group, rounded off a wonderful day sat around the log fire eating delicious mince pies and talking birds – what else!

Thanks to Muff for her organising this day and the hospitality towards the end; to Nigel Harcourt-Brown for the pictures (all taken in poor light) and to all attendees who made the day so enjoyable.

Happy Christmas and New Year to all.