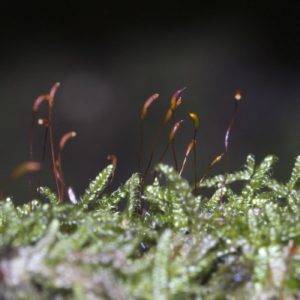 On a cool, overcast but dry day nine members were shown around High Batts Nature Reserve by Will Rich. Given the time of year, flowering plants weren’t particularly memorable, but a few fungi were identified such as Birch Polypore, Candle-snuff , Dead Man’s Fingers, Jelly Ear and the only puffball to grow on wood, Stump Puffball (Lycoperdon pyriforme).

Thankfully, there was a good number of mosses and liverworts including some in a calcarious ‘scrape’ that are restricted to base-rich areas, such as Entodon concinnus, Ditrichum gracile and Thuidium assimile. The dominant ground cover in the burnet rose scrubland was of the mosses Hylocomium splendens, Rhytidiadelphus triquetrus, Rhytidiadelphus squarrosus and Pseudoscleropodium purum. Trees on the river bank held the flood-zone mosses Leskea polycarpa and Syntrichia latifolia, which looks black and shrivelled when dry but instantly unfurls bright green leaves on moistening. 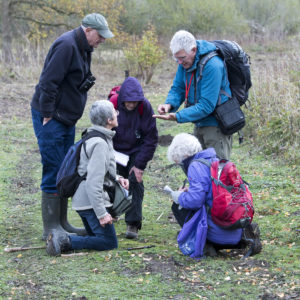 After lunch, which we took in the ‘Hotel’, Will led us ‘off piste’ to the northern edge of the reserve to see a small waterfall that held, amongst others, the semi-aquatic moss Platyhypnidium riparioides and the liverwort Lunularia cruciata.

Members listened intently as the features of some of the mosses were described and did their best to come to terms with the scientific names!

Bird life was sparse but good views of goldcrest, redwing and a couple of kingfishers were had. Sadly, the hawfinch recently seen in the reserve didn’t show.

Overall, a good day was had by all.