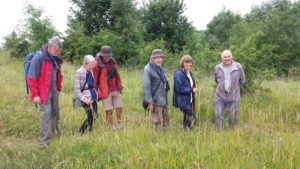 Some of our party (David Holmes)

The 8 naturalists were undeterred by the drizzling rain and the poor forecast as we got ready in the car park, at one of the most unlikely places to begin a natural history field trip. Surrounded by derelict mining buildings in a potholed wasteland of a car park beside an arterial road, none of us apart from Charlie our leader had ever been here before. Things did not look any more promising when we set off through a rubbish -strewn gap in the hedge and appeared to be crossing the back gardens of a terrace of houses. Then suddenly, through a gate up a wooded bank and we were into the Ledston Luck nature reserve, relatively recently regenerated from the old coal mine by a team of volunteers including Charlie. Here there was a profusion of flowers, in particular the yellow Tall Melilot which in places formed an almost impenetrable forest; the Pea family was well represented generally with both Hairy and Smooth Tare and masses of Common Bird’s-foot-trefoil, which seems to be having a very good year at all sites. The orchids were well past their best, apparently the season is much in advance of normal, but we saw the relics of many thousand Common Spotted, also Southern Marsh, and some hybrids, but none of the Bee Orchids which would be seen there earlier in the year.  There were several small ponds which were well vegetated with different species of rushes, sedges and reeds and should be good for Odonata in better weather. The plant list was growing rapidly and we set off back to change locations. 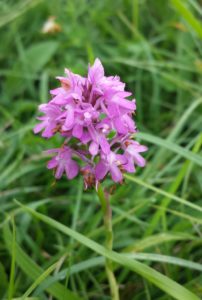 By remarkable luck the only real rain which fell in the whole day now occurred as we drove to the next site, Townclose Hills, where we lunched on the picnic benches then set off onto this SSSI magnesian limestone outcrop. Here there were many of the same flowers but also many new ones; the overwhelming impression was one of ‘bioabundance’. Fields of marjoram were knee-high, dotted with Clustered Bellflower, Agrimony and a vivid purple background of Greater Knapweed. There were positive thickets of Restharrow, both spiny and not, and Yellow-wort, Field Scabious and lots of those yellow hawk-somethings which we did not have time to identify. The orchids again were more or less finished but the remains of hundreds of Common Spotted and hybrids were visible. This is quite a large site and the flower recorder was developing writer’s cramp by the time we returned to the car park to move to our final location, Ledsham Bank.
This site is described in the YWT book as “a botanists’ dream”; a small secluded north-south valley on the magnesian limestone. Here we found, amongst much more, abundant Pyramidal Orchid, still more or less in full flower, and plentiful clumps of the relatively rare Dyer’s Greenweed. Any one of these three locations could have occupied us a whole day! 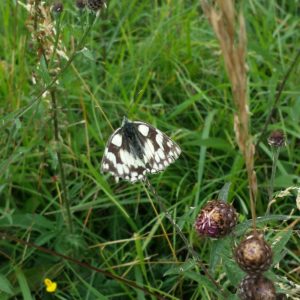 The plants dominated this trip, but we did see other orders – several butterflies, including skippers, Gatekeeper, Meadow Brown, Ringlet and at Ledsham Bank a beautiful Marbled White which posed for close-up photos. One specimen of the blue- bruising boletus Boletus purpureus was found, and a livid white Coprinus-type fruiting body. Birds were mainly heard rather than seen but there were yellowhammers at Townclose Hills. And Keith saw a toad.

This was an excellent day and we owe thanks to Charlie Philpotts of the Hardy Orchid Society who organised these trips so efficiently and led them with his infectious enthusiasm. Everyone felt that these were sites to be returned to in another year.