Eight stalwarts braved lashing rain as we were conducted through fen and bog at the reserve, which being at 1200ft can be rather uninviting in these conditions.

However Peter Welsh, our articulate and knowledgeable guide, compensated for the weather with his sunny disposition as he described the various plant species encountered, including Northern Marsh Orchid, Bogbean, Marsh Cinquefoil, Cranberry, Sundew and (not so) Common Wintergreen.  Unfortunately the weather ruled out sightings of any flies of the dragon, damsel or butter variety.

Lunch was taken in the old orchid house at the Field Studies Centre after which the rain abated though the wind whipped up white horses on the water as we toured the meadows and wetlands on the tarn shore.   There we enjoyed the sight of more orchids, mostly Northern Marsh but one or two Early Marsh and Heath Spotted.  Also of interest were Bird’s Eye Primrose, Butterwort and Marsh Lousewort.  Finally Peter showed us the drier limestone meadows on the higher ground, where species such as Milkwort, Mountain Everlasting and Fragrant Orchid flourish.  Very little bird life was seen during the day, the highlight being a number of Spotted Flycatchers,one of which gave particularly good views. 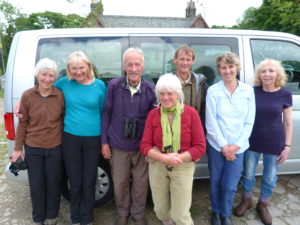 Just as we were saying our farewells the sun emerged, so we headed for tea and cakes in Malham village where the weather was considerably balmier by this time.  Many thanks to Peter, the National Trust and Natural England for an enjoyable and instructive day.