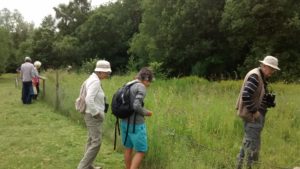 It was hard to believe that Meadows Day 2019 was upon us, when last year’s seemed only a short while ago. We celebrated the occasion with some guided walks on bees, dragonflies and botany and it was a real pleasure to see some new members visiting the reserve, and even more so to meet the children and grandchildren who came along. Farnham gravel pit is there for all of us to use and when the sun is shining and insects are on the wing, this spot certainly takes some beating. 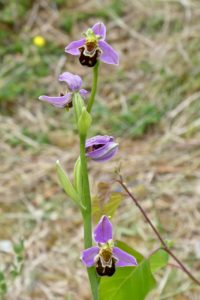 The morning began with a guided bee and dragonfly walk led by Bill Hall and David Holmes. It was easy to spot some of the bumble bees on the flowering Betony plants in area 2, which included the Common Carder and the Buff-tailed and Red-tailed bumblebees. Honeybees were also present

Only a few yards away David Aldred was viewing dragonfly activity on the lake. We joined him to see Common Darters, Four-spotted Chasers and Emperor dragonflies. A Banded Demoiselle, Common Blue and Emerald damselflies were also present including a number of newly emerged ones. Then, at the pond, a Black-tailed Skimmer was spotted, whilst under our feet in the grass we were finding tiny frogs and toads.

Ringlet, Meadow Brown, Speckled Wood and Small Skipper butterflies all obliged with appearances, with a stoat adding to the records list just before we had lunch.
The afternoon session was a guided botanical walk led by Kevin and Claire Walker and their children. Farnham Gravel Pit is home to well over 400 plants. So despite the fact that we were stopping every few minutes to look at them, the group managed to get round the South Lake and we had a very relaxed and enjoyable afternoon. It was particularly good to be accompanied by children who were playing happily alongside the water and spotting all sorts of wildlife including the fish and a Moorhen’s nest. 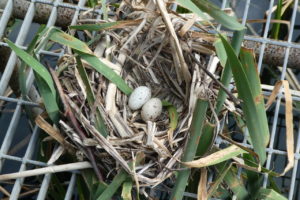 Kevin even managed a grand tree finale by pointing out three types of Alder – Native, Italian and Grey. He then made a nature table to show us four species of Willow – Crack, Osier, Goat and Grey.

This year’s Meadows Day showcased Farnham Gravel Pit at its very best. It served as a reminder of how lucky we are to have this resource available to us on our doorsteps. So remember the adage – use it or lose it. Our thanks to Kerry and Muff for organising, and to all our leaders for their guidance.