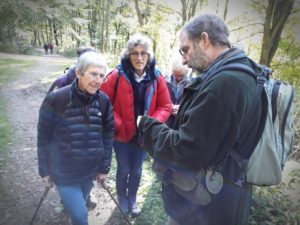 Our annual fungus foray began at the Woodland Trust car park on Ripley Road with some fine, bright autumn weather. At this spot the gorge comprises broadleaf woodland in a lovely steep-sided valley and there certainly was no shortage of fungi there for us to see. Ownership of this land passed to the Woodland Trust in 1995.

A group of 8 of us set off into the gorge to look for fungi, under the expert eyes of Andy Woodall and co-leaders Mike and Joyce Clerk of the Mid-Yorkshire Fungus Group.

Some of the first fungi we found were Sulphur Tuft and Oak Stump Bonnet, which unsurprisingly was growing on dead oak. We also found plenty of Honey Fungus, a dangerous parasite of trees and shrubs which spreads by long, black cords resembling bootlaces. And as usual, the Elder trees provided some fine examples of Jelly Ear and Elder Whitewash. 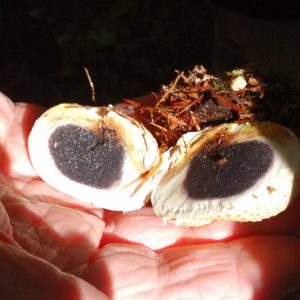 Andy showed us how to identify fungi by several means including cutting them open, and using our senses of smell and taste and touch, although care had to be taken! He explained the distinction between Earthballs which are inedible, and Puffballs which are edible, cutting them open to show the spore mass. Some fungi need to be identified by a spore print. He also showed us some perennial bracket fungi which he left untouched in order for them to grow outwards the following year.

We then found two different species of Inkcap, and saw the different stages from edibility to messy deliquescence! The Common Inkcap has a striated, silky surface. It should not be eaten with alcohol – the result is severe nausea, so that it was once used as an aversion therapy for alcoholics! It was pleasurable to find several groups of people including family members stopping to ask about fungus species that they had themselves found in the woodland. Some people even brought specimens up to Andy to ask him to identify them.

We followed the path and reached the riverside, where some invasive Himalayan Balsam was growing, although fortunately there was not much to be found there. Then some of us enjoyed our lunch sitting on Thora Hird’s bench beside the River Nidd, whilst the majority who could not fit on to the bench enjoyed theirs equally despite sitting on the ground. 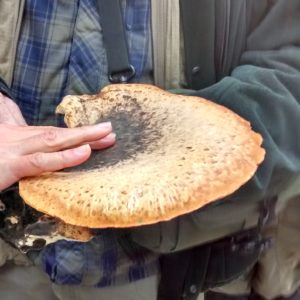 We then crossed Burgess Bridge (opened in 1988) only to find a fabulous show of Fly Agaric below the birch trees. Nearby was found the uncommon Green Elfcup, which was prized for its effect staining wood. The green-coloured wood, called ‘Green Oak’ was once much used in the manufacture of Tunbridge Ware. Surprisingly fungus-like were some slime-moulds, including an orange, squirtable variety to be kept away from small children.

Many thanks to our leaders for providing such a fascinating day of mycology. We are already looking forward to a 2019 Fungus Event.