This was an eagerly awaited trip because of the superb habitat along the coast and the promise of Roseate Terns along with thousands of nesting seabirds on Coquet Island. As luck would have it, a pair of Whiskered Terns were lingering at RSPB Saltholme so a quick detour there got the trip off to a great start. They are uncommon Marsh Terns and were a lifer for quite a few of us. They are wonderfully agile and have shorter tail and wings than their sea tern cousins.

The next stop was Crimdon Dene for more terns, this time  the Little Tern.  The air was full of their calls, high up in the blue sky and a few were just starting to nest along with Ringed Plover in the heavily protected area, fenced off from predators.

As we got back to the coach a few drops of rain were the precursor to a thoroughly heavy downpour, and away in the west we saw the incredible sight of a ‘twister’ stretching from the cloud base to ground. Seen in the UK, that was another lifer for many too.

We met Jack and Muff at Druridge Bay where we had lunch to the accompaniment of the chatting of a family of Stonechats and a good variety of water birds were on the lagoons.  This was a quick visit as we had a rendezvous with the boat in Amble. After forging our way around the narrow streets, counter-intuitive one way road system and a Sunday market in Amble we finally got to the boat.

The weather was perfect and Eider Ducks were everywhere in the harbour. As we got nearer the island squadrons of Puffins flew past and tern activity increased, Arctic, Common and the most prized of all, the Roseate! They are quite distinctive at close range, beautifully pale, long tail streamers and when perched show the most subtle rose coloured chest. Distinctively they plunge dive from a greater height than the other terns.

To complete the tern tally, Sandwich Terns were on the island nesting along with Fulmar, Kittiwake, Puffin, Guillemot, Razorbill and Canada Geese on this wardened site. The terns have been encouraged to breed in specially designed nest boxes, all numbered for ease of surveying by the RSBP wardens who protect them round the clock all through the breeding season. There were Turnstones, Purple Sandpiper, Oystercatcher, Rock Pipit and Dunlin on the shore line. The skipper of the boat, said there were no totals for Roseate Terns yet this year, but Coquet Island holds 90% of the UK population of this, one of our rarest breeding seabird.

Along the harbour wall at Amble Colin counted 64 Ringed Plover which he suspected were bound for breeding sites further north and just resting up there. 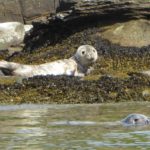 We thanked both Young and Old Dave, for a very interesting boat trip. Back in the coach, Colin drove us to the northern end of the coastal reserves near Hauxley and then down the dune complex to Cresswell where our final stop was very interesting, not least because we saw a rare survivor of the government backed Ruddy Duck eradication programme, one of only an estimated 150 left.

With our bird count well up in the 90’s we drove home, still yet to see a Kestrel, whereupon several were seen, where else but, hovering over a roadside verge?

This was a spectacular trip with an excellent ‘tern out’, thanks very much to Colin for the planning, booking and leading.