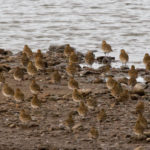 This was the first meeting of the year and 7 members joined Jill Warwick at the car park at Nosterfield. Jill explained that the water level is very low, but this was not deterring large numbers of Lapwing, Golden Plover, Wigeon and Curlew, as well as some Teal, Tufted Duck, Pochard, and Mallard, not to mention a  very nice female Goldeneye.

There were no other waders except Redshank and even Passerines

were very scarce. There were reports of a Little Egret but it was not seen on the day. Jill had said that some of the numerous Greylag Geese had been seen wearing BTO neck collars which proved that they had come from Windermere. Raptors included 2 Common Buzzards and a Kestrel at the reserve and a Sparrowhawk at Flasks. 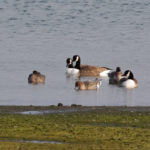 After we had lunched at Lingham we scanned the lake and then walked down to Flasks Lake, stopping to see a Little Owl sitting in its usual area with winter thrushes in the hedgerows. Great Crested and Little Grebes were feeding up on Flask’s Lake.

There was intelligence that there were big numbers of wild geese out in the fields near Carthorpe, so we set off in cars to test the theory. We befriended a local farmer who said that indeed they were a wonderful sight when they all came into his fields. However they weren’t there just now and with darkness falling we decided to leave the empty fields to fill up with geese after we had gone! The weather contradicted the forecast and got better all day, as we evaded the rain and wind, which must have slipped South.   A good start to the year, thanks to June for leading.