On arrival Simon Warwick gave us a resume of recent conditions at Nosterfield. High rainfall had increased water levels and this had attracted huge numbers of Teal and Wigeon as well as good numbers of Lapwing and Golden Plover. 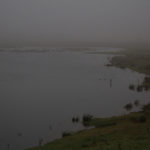 View from the hide! Malcolm Jones

Due to foggy conditions, we more or less had to take his word for it! 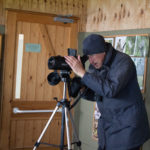 I see no duck!

We picked out three Goldeneye, a Little Grebe and a lot of ghostly duck/goose shaped shadows. One was singled out as a Barnacle Goose amongst the Greylags. A Sparrowhawk glided silently past the hide window and into the fog. Sadly, with no wind this fog was going nowhere. Passerines included Nuthatch, Fieldfare, Mistle Thrush, Marsh Tit and Goldfinch. The weather wasn’t very Christmassy, but nevertheless, we retired to a local pub for a Christmas lunch and to await The Greatest Show on Earth! No, not Sue’s flashing Christmas tree hat, but Colin had received information about a Starling roost at Ripon Racecourse. 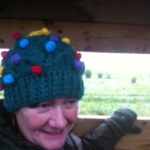 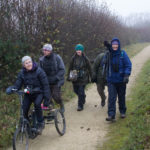 Some of the group. Malcolm Jones

The birds certainly played their part, even though the visibility was a bit challenging. Some of the Starling flocks were so dense it was breathtaking. They arrived in their hundreds and merged from left and right building up to an ever bigger flock, interrupted briefly by a cruising Sparrowhawk which created a Starling-free zone for just a few seconds. No sooner had one flock plummeted to the reed bed than others came to replace them. This continued for a full 40 minutes. As the light fell over Nicholson’s Lagoon, a pair of Goosander flew in, followed eventually by several more. An easterly wind picked up and we realised the Starlings were proving to be noisy neighbours to the quietly roosting Goldeneye, Tufted Duck, Wigeon and a Great Crested Grebe. Time for us to leave for home too.
Many thanks to Simon and Colin for a really interesting day and Happy Christmas to all our readers!