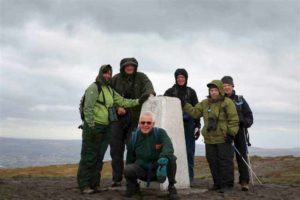 The forecast threatened cold, strong winds and with rain later in the morning.  Absolutely correct, but despite this seven optimists met at Barley car park before moving on to a suitable parking spot near  the foot of the hill.  The walk to the top was steep and Ann received a well-deserved round of applause for reaching the top of the path.  Once near the summit we spread out and headed towards the trig point looking for Dotterel, without success.

We then moved on,  spread out like a line of skirmishers, by this time not too hopeful of finding the birds.  But within ten minutes Sue in the centre of the line spotted a Dotterel and stood still, arm raised, to summon the rest of us.  We got excellent views of three birds, although we think there were more, and gently worked our way towards them, one of our group nearly treading on one in the process.

All of us managed to get quite close to the birds without upsetting them and some good photo opportunities resulted, despite the high winds and frozen fingers. 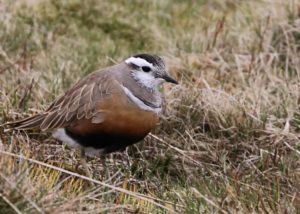 A retreat to the car park at Barley for some much needed warmth and refreshment was followed by a visit to Stocks Reservoir where the rain was driving horizontally.  Despite this, the Swallows and Sand Martins were struggling against the wind over the water in a search for food.  We also saw a flypast by a male Merganser and some distant waders, geese and gulls.

We saw in all eleven bird species at Pendle and twelve at Stocks Reservoir; not a great total but in view of the conditions we were delighted by our success and proud of our survival.  My thanks to everyone who turned up.