We arrived on Redcar seafront and immediately felt at home as we spied the ‘Stray Café’ . A Bettys by the sea, wonderful! But first things first, sea watching. High pressure over the UK was dragging in low cloud and drizzle from the North Sea and reducing the visibility with it. 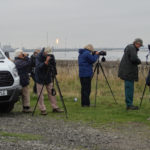 An hour’s watch saw Teal and Common Scoter flying north in quite large numbers, along with small groups of waders, Gannets, one Red-throated Diver, and one or two Arctic Skuas. There were Sandwich and Common Terns on the beach along with Turnstones and Ringed Plovers. Most skuas, shearwaters and divers were further out to sea with light winds, unlikely to push them inshore.
Next, we went to South Gare, which has its own charm. Conditions were ideal for the high tide roost at the tip. We picked out Sanderling, Dunlin, Redshank, Ringed Plover, Curlew and Oystercatcher, but still very little was moving on the sea. The local fishermen were not having a very good day and commented that the water was dirty, presumably from a fuel spill. After lunch the River Tees tidal estuary was exposing estuarine mud as the tide ebbed away. There we found a Bar-tailed Godwit, a juvenile Knot and Whimbrel and more Redshanks, none showing any inclination to do anything but sleep. They must have had a long flight to get this far.

South Gare is an area of reclaimed land and breakwater on the southern side of the mouth of the River Tees. 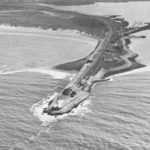 It has a uniquely diverse habitat. The land is made of from thousands of tons of basic slag from blast furnaces. The high limestone content of the slag produces a base rich soil that is attractive to lime loving plants. The area consists of tidal mudflats, scrub, grassland, sand dunes, rocks, freshwater and salt pools. This is one for the botanists! The group quickly spread out to search the area. We found unusual species and some stunted versions of common plants. The plant list ( click HERE to view) was finalised by Muff Upsall and Sonia Starbuck. This vegetation can be very good for attracting migrants such as warblers and flycatchers. This day we saw a pair of Stonechats and small flocks of Linnets, Goldfinches and Starlings.
En route homeward, we called in at Scaling Dam on the A171. This is a shallow reservoir attracting both dabbling and diving ducks. We saw Tufted Duck, Mallard and Heron with Willow Warbler and another Stonechat on the moorland edge, bringing the total bird count to 53.
Many thanks to Colin for leading a greatly enjoyable trip with some really interesting places, birds and plants.