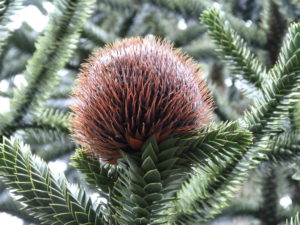 Fourteen of us assembled outside the gates of Ripley Castle and were greeted by the sight of two Nuthatches in a nearby tree.  We then entered the castle grounds, where unfortunately a shoot was in progress, so we could not enter the deer park.  Nevertheless, the disturbance created by the beaters caused several groups of deer to sweep majestically across the far side of the lake.  The birds on the lake seemed unperturbed by gunfire and we counted 4 Goosander, 33 Shelduck., c50 Mallard, c300 Black-headed Gulls, two Herons and four Cormorants.  A  dozen Curlew were feeding in the deer park.  After perambulating the near side of the lake we had an uneventful stroll back through the woods and thence into the walled garden, where it was gratifying to see feeders provided with many small birds in attendance, including another Nuthatch.  We were also intrigued to see a Monkey Puzzle Tree in fruit, which is apparently a rare event in this part of the country. 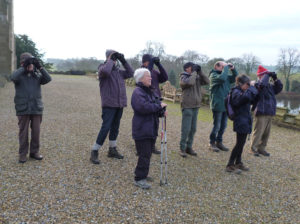 Leaving the castle grounds (many thanks to Sir Thomas for allowing us free admission) we proceeded up Birthwaite Lane, where unfortunately the Bramblings were not present this winter.  However, we were rewarded with excellent views of a pair of Bullfinches feeding on nettle seeds.  We once again ran into the shoot as we approached Cayton Gill, but they were kind enough to allow us free passage.  In the gill itself we enjoyed the spectacle of at least four soaring Buzzards and three Red Kites, one of which was seen to dive bomb another, inoffensively perched in a tree.  Having run the gauntlet of two very frisky horses, the walk back through fields on permissive paths (thanks again, Sir T) was uneventful.

A total of 41 species was seen, for which our leader Rob Adams and our telescope bearer Andy Hanby are to be congratulated.