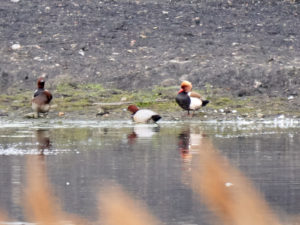 As we travelled south, we left the dismal wet morning behind to arrive at Fairburn where it was bright and dry. From the centre car park, Reed and Sedge Warblers were singing in the reed beds and Whitethroat was seen. Many Swifts were circling overhead; Blackcap and Garden Warbler were also singing and Tree sparrows were busy at the feeding station. From the centre, our first stop was at the hide from which we saw Sand Martins at the wall. Next along the stream to the Kingfisher screen, just in time to see the hoped-for species before it flew off. We then made our way up onto the coal tip trail where four Little Grebes and a Pied Wagtail were on the first lagoon while three Spoonbills flew overhead. Red-legged Partridges were seen across the river. Sky Lark and Willow Warbler were singing, Great Spotted Woodpecker and Nuthatch called. 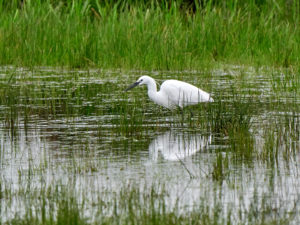 As we approached the two lagoons, a Bittern was booming and a good look around produced a drake Red-crested Pochard, Little Ringed Plovers, several pairs of Little Grebes, numerous Common Pochards, Great Crested Grebe with young with several singing Sedge Warblers and a Reed Warbler. A Cuckoo called and was seen as it perched on a fence post before flying towards the group, this was the first of two sightings there. Looking across the reserve to the moat, a pair of Spoonbills was at the nest site with a Grey Heron, while a Little Egret was seen in a nearby field. A shout of ‘Bittern’ excited us all, the bird obligingly flew across in front of us and dropped into the reed bed to everyone’s delight! Another Cuckoo flew across and landed on a nearby post. An Egyptian Goose was located in a distant field. On our return, a strange ‘chack, chack’ call was heard from the trees and then the mystery bird flew out — a Green Woodpecker, which had been heard calling previously! 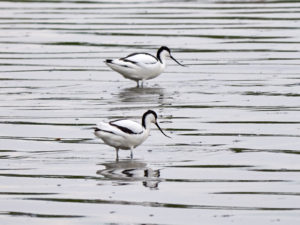 After lunch we drove to Lindyke and, as we walked along the track, three Avocets flew over and two later dropped in front of the hide. From there we saw a Common Tern, Dunlin, Common Sandpiper, Shoveler, Shelduck and Gadwall. Further along, a burst of song announced a Cetti’s Warbler, it was so close and at first we could not see it, but we persevered until we did! A Lesser Whitethroat perched up well for us too. As we walked along the embankment a Kingfisher was seen but a Garden Warbler refused to show but, on our way back, a Peregrine Falcon flew overhead. A splendid end to a great day’s birdwatching and in perfect weather. Well done to the team for finding 76 species, exceeding last year’s total of 75 species.