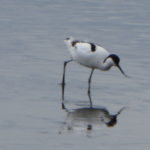 Our first stop was WWT Martin Mere which is known for its collection of global ducks which have been pinioned and afford close range views, which is not how many of us usually get to see ducks! They also run a breeding programme for these species, which was interesting to hear about. The same fences which keep the ducks safe from predation also provide a haven for small passerines, nesting with impunity close to the public path on the other side. Here we listened to a Blackcap, in full voice and watched a Chaffinch nest-building at close range. A good selection of waders were on the marsh pools, including Redshank, Lapwing, Avocet, Black-tailed Godwits and Ruff, the latter two were starting to acquire their breeding colours, many of the Godwits in full summer plumage looked wonderful. 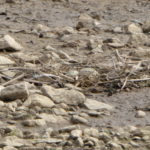 Three stunning Mediterranean Gulls in breeding plumage were also viewed from the hides. A few Whooper Swans, Pintail and Wigeon were still enjoying the mild waters around the Mere. Acting on a tip off, as they say, we were directed to a site, high in an ivy clad tree, where two Tawny Owls were roosting side by side, which is quite unusual for this time of year. Buzzard and Kestrel were seen over the marshes.  After lunch we called in at RSPB Marshside, north of Southport. Here they were in the process of installing an electric predator proof fence which will hugely increase the breeding success of the spectacular number of birds out on the marsh. A large assemblage of Golden Plover, and a second summer Little Gull added to our tally of 69 birds for the day.
We then sought our next habitat, the dunes of the Ainsdale and Birkdale Sandhills Local Nature Reserve. 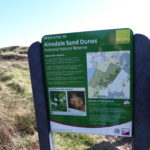 The Dunes Will Rich

It is one of the largest areas in Britain of dune ridges and valleys, containing coastal slacks, wet hollows with an ecosystem all of their own, rich in unusual plants and home of Natterjack Toads and Sand Lizards. Both species are threatened by habitat loss and are protected by British and European law, as they were once more widespread, and have suffered from habitat destruction over the last hundred years. They are both very habitat specific and as we walked on the boardwalk and explored the dune slacks, there was a noticeable feeling of a being in a micro-climate, sheltered from the onshore winds. The lizards require a sunny habitat and open undisturbed warm sand to lay their eggs.  The toads similarly rely on the warmth of the coastal slacks’ shallow warm water to breed. It was an absolute delight to wander about these dunes, plant- spotting and listening to Willow Warblers marking out territory. We also saw a Stonechat and two Wheatears. Sadly we saw no lizards or toads, but now it’s on the radar, who would not look forward to another visit to such a wonderful site for another look? 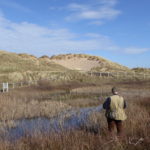 Many thanks to Colin for driving and guiding us round such an interesting day. 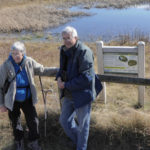 Martin Mere is probably not as well known for its wild side, but more the captive fowl. The Fylde dune system is perhaps similarly overlooked by many, overshadowed by the famous championship golf courses, and fish and chips shops. But for no longer, we all learned a lot, including where to get the best fish and chips, and thoroughly enjoyed the day!