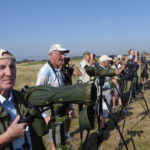 The group on watch Will Rich

A sellout bus load was greeted by a glorious autumn day for Colin’s last field trip as leader. The wind was a light South Easterly, which kept the temperature bearable, unlike parts of Britain which were experiencing thirty degrees, temperatures not seen in September since 1911.

A visit to the Canal Scrape hide produced a Redstart, Spotted Flycatcher, Meadow Pipits and Linnets. Whinchat numbers achieved double figures very quickly which was an absolute treat! Wheatears and Hirundines were there in good numbers too. Notable by their absence however were the warblers, it was very quiet on that front. 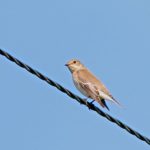 The Crown and Anchor car park produced, as ever an excellent opportunity, this time for a juvenile Pied Flycatcher, launching itself from a telegraph wire to feed up before its long journey. We on the other hand had a short trip to Kilnsea Wetlands. 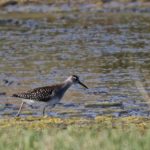 Not all of us knew Beacon Ponds which lay behind the Kilnsea Wetland lagoon, where we paused to see a wonderful Wood Sandpiper and a cracking Curlew Sandpiper amongst the multitudes of Dunlin, Knot, Redshank, Terns, Black Headed Gulls and Oystercatchers.

Interestingly, there is an acoustic mirror on the horizon which was used to listen out for approaching Zeppelins in WW1 and subsequently planes, before radar was invented.

Beacon Ponds is quite a large body of water which by all accounts had changed from several small ponds to one big one over the years of inundation from the North Sea. Most waders were over on the far shore but we managed to pick out a Little Stint and another Curlew Sandpiper as well as Sanderling and Ringed Plovers. The weekend’s Kentish Plover had perhaps already relocated sadly. There was an influx of waders as high tide approached. Amongst them were several magnificent Grey Plovers still in their monochrome breeding plumage. 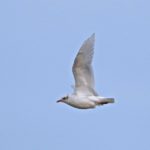 A high tide on the estuary afforded good views of wader murmurations as birds which were clinging to the last bit of salt marsh were finally displaced by the waves.

At that point, we were ourselves finally ready to be relocate back to Harrogate. 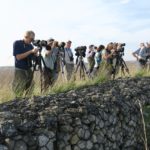 The group had presented Colin with a card and book token in appreciation for all the trips which have been many and varied over the years, but one common theme…..Colin’s unerring enthusiasm and determination to make sure we all learnt something while having a great day out!

Many thanks as well to all the photographers who have done sterling work to capture the moments which have been so special.