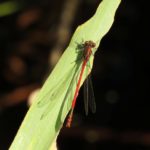 It was a fine morning as 12 naturalists, having managed to outmanoeuvre the Great Yorkshire Show, set off for East Yorkshire. Whilst negotiating the M62 Colin was casually identifying stock doves, buzzards and other tiny dots on the horizon. Arrived at Thorne village, some time was spent selecting a sufficiently salubrious location to leave the minibus, since we did not want it to suffer the fate of the nearby solar farm which had been pelted with rocks! Our respectable side-street also had the benefit of House Martins and Swifts.

After a history of exploitation, Thorne Moor is now managed for wildlife, as part of the Humberhead Levels NNR. It is the largest area of raised bog in the lowlands, an SSSI and an SPA. 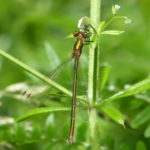 The acidic peat of the moor has been interspersed with limestone from human activities and as we entered the site we found typical flora of calcareous grassland such as Yellow-wort, Centaury, Hop Trefoil, Hairy Tare, Restharrow and plentiful Common Spotted orchids and a few Pyramidal – the dry margin of the moor was a veritable garden of colourful flowers. Ringlet butterflies abounded and Small and Large Skippers were seen. 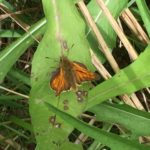 Walking on into the moor the surroundings became more marshy and the beautiful Emerald Damselfly, Large Red Damselfly, Southern Hawker and Four-spotted Chaser were observed although in very small numbers. Colin alerted us to the purring of Turtledoves in the adjacent sallows but of course they were impossible to see, but those at the front of the party were rewarded with two glimpses of Adders which had been basking by the path, then a common lizard nearby. 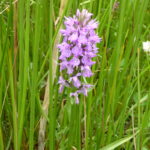 The route now led between open ditches of peaty water with Sphagnum and Polytrichum Moss in abundance, Phragmites reeds and Marsh Pennywort. Deer were spotted in the distance and Marsh Harrier, Red Kite and Whitethroat were seen but there were generally few birds, and no sign of the (probably extinct) Mire Pill Beetle or the (probably terrifying) Giant Raft Spider. 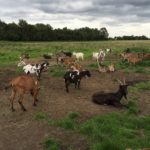 We then retraced our steps and travelled around to the Lincolnshire side of the moor which seemed more cultivated and drier.  We were beginning to get an impression of the huge area the Moor covers. There were some interesting Cheviot goats being grazed here as part of a conservation project and Linnet and Yellowhammer were added to the bird tally, Climbing Corydalis to the plant total.

To round off the day we hopped over to Blacktoft Sands RSPB reserve and did a whistlestop tour of the hides, yielding good glimpses of Bearded Tits and immature Water Rail, a Barn Owl in its box, Little Grebe with chicks, some good close views of Marsh Harrier, and Teal, Lapwing, Little Egret, Heron, a Spotted Redshank and a Black Tailed Godwit – altogether few waders, which seem to be in short supply everywhere this summer. The vegetation here as everywhere was particularly luxuriant with Hemlock plants as tall as trees – a result of this wet summer? 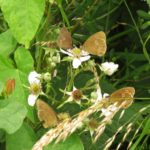 Many thanks to Colin for his planning, driving, instruction and entertainment, and to Will for navigating, both in forward and reverse gear!