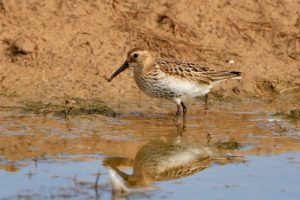 This popular venue attracted 14 members and it was a perfect day for the visit. After stopping at The Bluebell car park to pick up a Wheatear and some Sandwich Terns over the sea, reports of a White Rumped Sandpiper made YWT Kilnsea Wetlands the next stop of the day. After sifting through many Dunlin and Redshank we saw this tiny wader make a run for open ground and this was our first sighting of it. There were subsequent views as it fed around the lagoon edge. While we scanned the wetland a Greenshank, a single Avocet and several Pintail and Wigeon added interest, with Curlew seen feeding in the adjacent grassland.
Our next target bird was the reported Barred Warbler at the Warren, and we eventually found it flitting around with a Lesser Whitethroat and Garden Warbler. 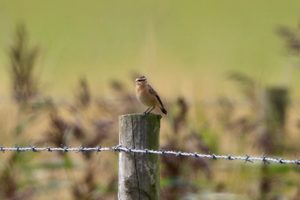 The sea watch was fairly uneventful but the wonderfully colourful flower meadow attracted Whinchats in double figures, a Stonechat, Yellow Wagtails, hoards of Goldfinches and Linnets and a few Greenfinches.
Canal Scrape hosted a Common Snipe but the Little Stint was reported later in the day.
The high tide wader roost was pretty spectacular with a supporting cast of a close-in Whimbrel and some stunning Grey Plovers, most in breeding plumage.
Thanks to June for a truly memorable trip.