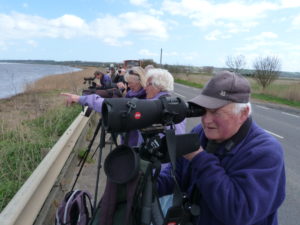 This event was well attended, thanks largely to our leader’s reputation as a consummate bird finder.  Fifteen of us set off in the minibus, followed by four in a car.  Our first stop was North Cave Wetlands, where species including Avocet, Yellow Wagtail and Little Ringed Plover were seen.  We next headed over the Humber Bridge to Far Ings National Nature Reserve, where Cetti’s Warbler was heard but little was seen to cause excitement.  Leaving Far Ings, we stopped on a busy main road (see photo) to train our telescopes on the distant Read’s Island, where the highlight was a Spotted Redshank in breeding plumage.  Fortunately none of our party fell victim to the speeding traffic and we proceeded in the minibus to Alkborough Flats, where a number of hides overlook an extensive reedbed at the confluence of Trent and Humber.  Several species were added to our list here, including Marsh Harrier, Bar-tailed Godwit and Little Egret.  The long drive round the upper reaches of the Trent was accompanied by numerous back seat drivers shouting contradictory instructions, but despite this we managed to find the RSPB reserve at Blacktoft Sands, where those of us lucky enough to retain some hearing were treated on arrival to a Grasshopper Warbler reeling.  We also had excellent views of Marsh Harriers.  Leaving for home at 5.30pm and sharing sightings, we found we had amassed an impressive total of nearly 90 species.  Many thanks to our leader Colin Slator.